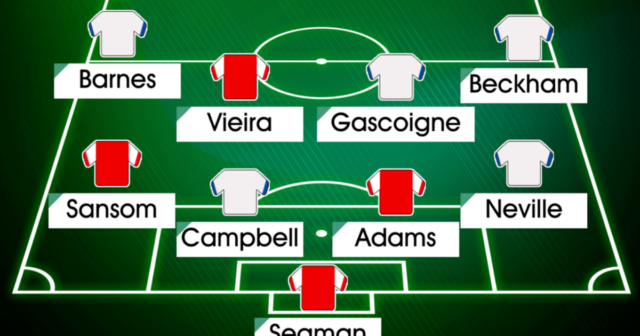 ARSENAL legend Paul Merson has named his best XI made up of former team-mates… with two ex-Man Utd stars included.

The Gunners star was a part of some legendary sides for both club and country.

Merson named his best team from individuals he played alongside

And now he has identified the XI players he would have in his career-best team – as reported by FourFourTwo.

In goal, it is no surprise Merson went for Arsenal icon David Seaman – who made well over 500 appearances for the North London outfit during a 13-year spell – and also became an England regular.

At the back, two of Merson’s former Gunners colleagues Kenny Sansom and Tony Adams make the line-up.

Another Arsenal centre-back, Sol Campbell, is also included – although Merson only played with him for England.

Propping up the back four is Manchester United legend Gary Neville who also played with Merson for the national team during the 90s.

In the midfield is one of Arsene Wenger‘s best ever signings – Patrick Vieira.

And he is joined in the centre of the park by one of England’s most talented ever players in Paul Gascoigne.

On the flanks, United and England icon David Beckham occupies the space on the right, with John Barnes on the left.

And then up front are two of Arsenal’s greatest ever strikers – Ian Wright and Dennis Bergkamp.

The pair scored a combined 305 goals for the Gunners and were both a part of the 1997/98 title-winning side.

But he just missed out on a Premier League title in ’98 as his 12-year stint in North London came to an end the previous season.

Did you miss our previous article…
https://www.sportingexcitement.com/football/premier-league/allan-saint-maximin-gifts-lucky-newcastle-fan-rolex-watch-worth-thousands-after-opening-day-win-over-nottingham-forest/