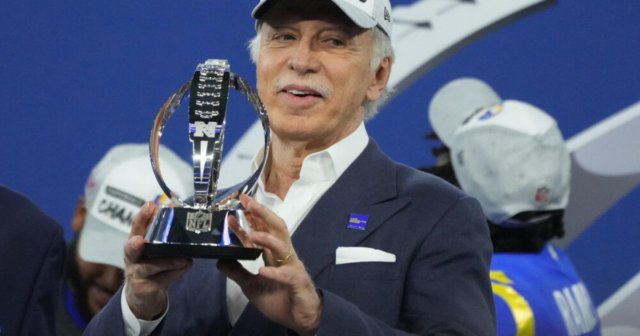 ARSENAL owner Stan Kroenke finally has his hands on some silverware after his LA Rams beat the San Francisco 49ers to reach Super Bowl LVI.

The Rams chief celebrated after watching his side stage a fourth-quarter comeback to claim a 20-17 win over the 49ers at SoFi Stadium.

The victory saw the Rams crowned NFC Champions as they booked their spot in February’s Super Bowl against the Cincinnati Bengals.

And Kroenke – who controls both the Gunners and Rams through his KSE group – beamed with delight as he hoisted the George Halas Trophy aloft.

The joke wasn’t lost on Arsenal fans, who might have seen their side lift the FA Cup in 2020 but haven’t claimed a Premier League trophy since 2003/4.

User LazCab wrote on Twitter: “Congratulations to Stan #Kroenke on winning yet another trophy with a team that’s not #Arsenal”

Josh Kail quipped: “Kroenke holding a trophy has to feel like living in the upside down for Arsenal fans.”

Gregory King joked: “Me watching Stan Kroenke lifting the NFC championship trophy – hoping he would mention how he would make Arsenal great again.”

And Jason Lincoln wrote: “Stan Kroenke on the stage to pick up the NFC trophy, he has absolutely no idea what an Arsenal football club is any more.”

The Rams next face a home Super Bowl as they take on the Bengals at their Inglewood home, while Arsenal will battle for a top-four spot when the Prem resumes next month following its winter.

Did you miss our previous article…
https://www.sportingexcitement.com/football/premier-league/everton-announce-frank-lampard-as-manager-as-chelsea-legend-returns-to-dugout-tasked-with-saving-clubs-season