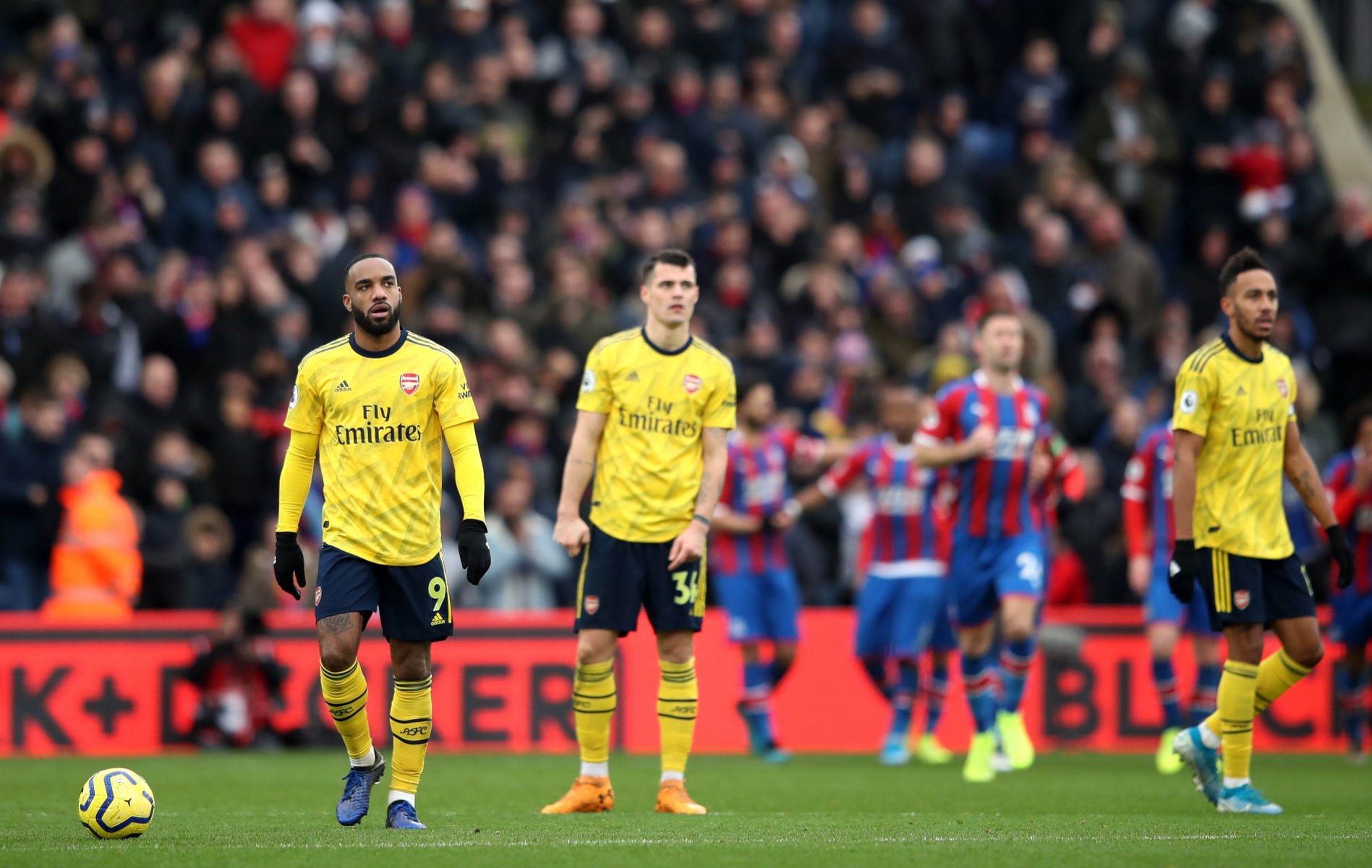 PIERRE-EMERICK AUBAMEYANG went from hero to zero as he scored and was sent off for Arsenal.

The Gunners captain put his side in front at Crystal Palace before VAR judged his nasty challenge on Max Meyer to be worthy of a red card.

Early in the second half, Jordan Ayew had brought the Eagles level as his deflected strike bounced over Bernd Leno and into the back of the net to split the points.

Was not tested in the first half except for a routine save to deny Cheikhou Kouyate.

Could only stand and watch as Ayew’s effort looped over him and into the back of the net.

The right-back had one job today and that was to keep Wilfried Zaha quiet. He did that pretty effectively.

Did pick up a booking for a bungling challenge on Kouyate.

For the first time in a long time, Arsenal are looking pretty solid defensively. Sokratis was more than a match for Jordan Ayew, who got very little change from the Arsenal back line.

Started the move which led to the Arsenal opener, playing a sliding through ball into the hole. Was constantly getting on the ball, head up, looking to make something happen.

Got picked to the ball for the Palace equaliser which then ricocheted off him beyond Leno but was otherwise defensively sound, getting his head on most of the balls into his box.

And wasted a late free-kick by SHOOTING from pretty much inside the centre circle.

His presence down the left was a real thorn for Palace all afternoon. He got forward very well from the first minute and hugging the touchline allowed Aubameyang to drift infield more.

Will want to be as discreet as possible leaving Selhurst Park as he was not exactly Mr Popular for a collection of tactical fouls and going down clutching his face after a slight push from Martin Kelly.

Is getting back to his best after struggling in 2019 under Unai Emery. Was often the man to sweep up, win the ball back in midfield and stop the Palace attacks before bringing it out.

Came off at half-time after picking up a knock but was spotted sitting on the bench – he was a real miss for the Gunners who didn’t look the same after he went off.

Not as eventful as his last two meetings with Crystal Palace – scoring a free-kick at Selhurst Park last season and then his incredible outburst at the Emirates in October.

Back in the side, he continues to show that despite the links with a move away, Arteta still has a good footballer on his hands and will be keen to help him improve.

Ended the game, ironically, with the armband this time.

Arsenal were linked with Wilfried Zaha last summer but ended up going for Nicolas Pepe instead in a club-record deal.

One moment early in the match helped showed why, nicking the ball past James McCarthy and then sitting Gary Cahill on his backside with a very naughty turn but his heavy touch just let him down. How often have we said that about his end product this season?

Almost grabbed a late winner but his low drive came back off the post and fell kindly for Vicente Guaita.

In his favoured No10 role and helped tick things over for the Gunners. Not quite at the level he has been at in recent matches but crucially was effective in the goal. Took in the ball from Luiz and was too quick with his pass for the Palace midfield.

Was one of a number of Arsenal players to be on the receiving end of some robust challenges from the home side’s midfielders.

One chance, one goal. Clinical from Aubameyang. The presence of Kolasinac bombing forward allowed the Gabon star the freedom to drift inside and link up with Lacazette. That’s exactly what happened with 12 minutes gone as Aubameyang took the ball in his stride but still had work to do before slotting into the corner.

But was at the centre of the action on 65 minutes, crunching Max Meyer on the ankle. Initially shown a yellow, VAR correctly overturned it for a red. A potential ankle breaker, knocking his rating down.

Played the ball through for his captain to open the scoring. Delayed the pass slightly before picking out his man, who finished well.

Other than that, did not really have too much of a sniff and had to battle hard when his side went down to ten men, putting in shift with his defensive work.

Thwarted before getting his shot away for a late winner.

A straight swap at the interval as the Frenchman slotted in alongside Xhaka. Arsenal lost some of their bite without Torreira, despite Guendouzi’s best efforts.

Came on in the aftermath of the red card and looked dangerous at times, trying to make something happen. Crunched by James Tomkins.

Came on for the striker in injury time but too late to have much impact.