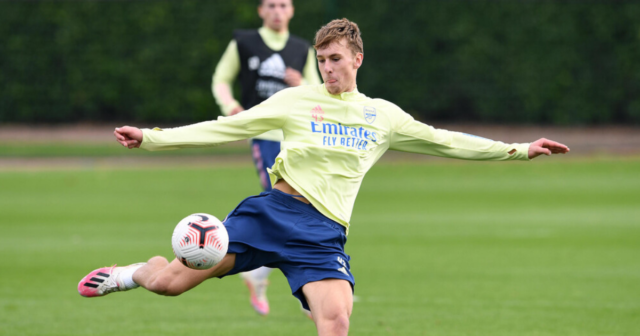 STRIKER Nikolaj Moller has officially joined Dutch side FC Den Bosch on loan from Arsenal until the end of the season.

Moller returned to Arsenal earlier this month from a spell with German side FC Viktoria Koln, and he will now head out on loan again.

Moller has departed Arsenal on another loan spell

The 6ft 4in Swedish striker has been likened to Zlatan Ibrahimovic in the past due to his powerful presence up front.

He joins Dutch second-tier side Den Bosch after netting three goals in 13 games for German third-tier outfit Viktoria Koln in the first half of the season.

Part of an official Arsenal statement read: “We wish Nikolaj all the best at FC Den Bosch and look forward to monitoring his continued development.”

Moller joined the Gunners from Swedish side Malmo in October 2020 for a reported £450,000 fee.

But he is yet to make a senior appearance for Mikel Arteta’s side.

Moller has been prolific for Arsenal U23s though, scoring eight goals and providing three assists in 18 appearances in the Premier League 2.

The Gunners are in desperate need of a striker, but Moller is not yet ready to make the step up to the first team.

Bizarrely, Pierre-Emerick Aubameyang flew out to Barcelona this morning ahead of a proposed loan deal, which has now reportedly collapsed.

The exiled former Gunners captain ‘surprised’ Arsenal by flying out to Spain this morning.

It’s claimed that Aubameyang is merely ‘on holiday’ visiting family.

But his arrival in Barcelona only for the move to fall through has drawn comparisons with Peter Odemwingie’s ill-fated attempt to join Queens Park Rangers in January 2013.