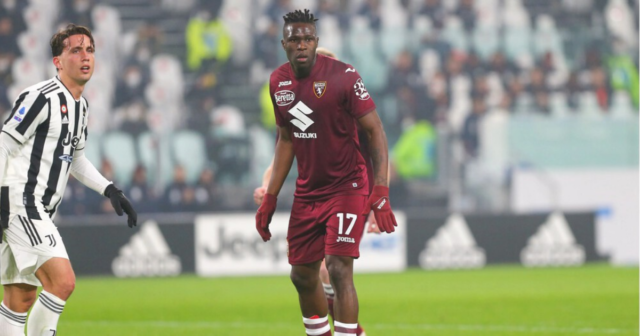 Singo, 21, has emerged as a transfer target for both the Gunners and Spurs following his impressive form for Torino in the Serie A this season.

The rapid Ivorian right-back has scored three times and conjured up four assists in 25 appearances during the present top-tier Italian League campaign.

His stellar performances have caught the attention of both the Premier League adversaries who are keen to bring him to their respective parts of North London.

And according to CBS, Mikel Arteta and Antonio Conte’s sides have simultaneously sent scouts to watch Singo in action several times this season.

Torino are said to be willing to do business for Singo if they receive an offer of £15million for him to avoid losing him on a free transfer when his contract expires at the end of next season.

However, the North London nemesis’ will also have to thwart the efforts of Liverpool who also have eyes on Singo, according to Football London.

Tottenham are aware of how shrewd Liverpool can be in business after they snatched Luis Diaz from their grasp in January’s transfer window.

Spurs were said to on the brink of signing Diaz from Porto before the Reds stormed in and brought him to Anfield for £50m.

And it could be a similar situation with Singo as the Reds can offer him Champions League football next season while Arsenal and Tottenham are still fighting for a spot in the prestigious competition.

If Singo decides to join any of the Prem trio it will most likely be as back-up.

And he’ll likely play second fiddle to Takehiro Tomiyasu at Arsenal if he goes to the Emirates.

However, with Tomiyasu’s deputy Cedric Soares reportedly surplus to requirements at the Gunners, Singo could take his spot.

It will be a similar situation for Singo at White Hart Lane where Conte’s said to open to getting rid of right-back Emerson Royal – who’s failed to impress since joining the Lilywhites from Barcelona for £26m last summer.

Did you miss our previous article…
https://www.sportingexcitement.com/football/premier-league/chelsea-chiefs-marina-granovskaia-and-bruce-buck-unlikely-to-remain-at-club-after-roman-abramovich-sells/