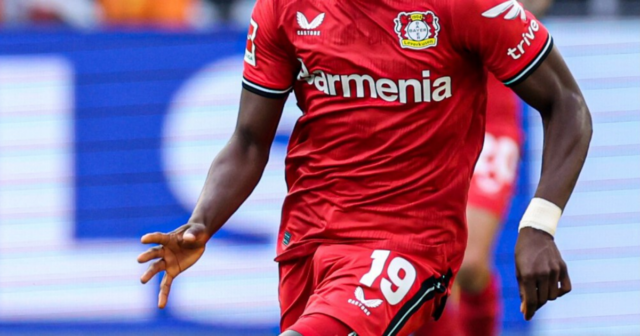 ARSENAL are set to make a sensational £60 million swoop for Bayer Leverkusen star Moussa Diaby, according to reports.

Mikel Arteta could be set to make the winger his last signing to “complete” their attack.

Despite the transfer speculation, Diaby started Leverkusen’s opening Bundesliga game away at Dortmund on the weekend

The Arsenal boss has already recruited heavily this summer, and boosted the attack with the signing of striker Gabriel Jesus.

But the club may have one final move in them before the window closes as they look to break back into the Premier League’s top 4.

According to Football Insider, the Arsenal majority owner Stan Kroenke has given the green light for the move for Diaby to go ahead.

The report says the Gunners believe the 23-year-old could “complete” their attack but money could be a sticking point for the negotiation.

Bayer Leverkusen value the Frenchman at £60m which is believed to be beyond the amount Arsenal are willing to pay.

The London club were hoping for a lower fee but are “willing to push the boat out” to secure the highly-rated Diaby.

The decision to go all out for the star was believed to be made before Arsenal’s convincing 2-0 opening day win against Crystal Palace.

Kroenke and other senior figures at the club are reportedly hugely encouraged by Arteta’s progress with the team, which could have helped sway them over.

Fans may be cautious though, as Arsenal’s last expensive money move for a winger in the form of Nicolas Pepe from Lille did not work out.

Diaby has been at Leverkusen since leaving Paris Saint-Germain in the summer of 2019.

He had an outstanding season for the German club last season , scoring 17 and getting 14 assists as they finished 3rd, five points behind Borussia Dortmund.

The wide man can also operate on either flanks, but in Germany has predominantly played on the right to allow him to cut on to his left. .

Arsenal are among the top spenders in the Premier League this window, with the £45m signing of Jesus followed by big money moves for the likes of Oleksandr Zinchenko and Fabio Vieira.