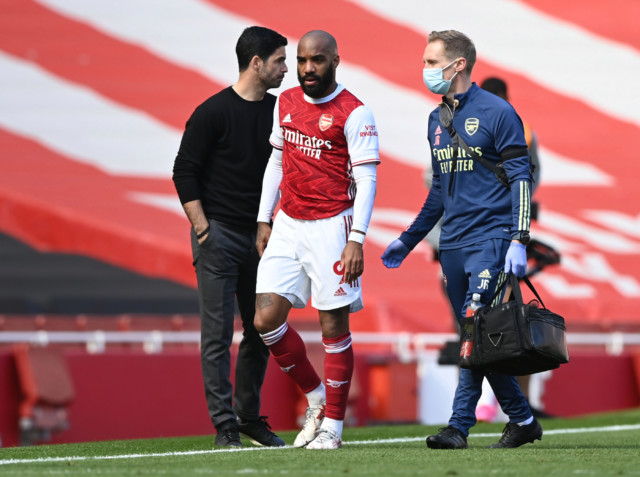 ARSENAL star Alexandre Lacazette has offered an update on his contract talks, insisting it’s ‘not only on my side’.

The Frenchman has been in brilliant form of late, scoring important goals against Slavia Prague, Sheffield United, West Ham and Spurs.

But, with his current deal set to expire in 2022, speculation is mounting over his immediate future.

After limping out of the Gunners’ 1-1 draw with Fulham on Sunday Lacazette, 29, let fans know where he stands.

He said: “My plan is to win a trophy with the club this season and it would be easy for me to pretend to have a contract extension.

“Everything is not only on my side, there is also the club, the manager. There are different things we have to think about.

“I don’t think it’s the right moment to talk about it.”

Lacazette hobbled out of yesterday’s match with an apparent hamstring strain.

And his boss Mikel Arteta believes that the current volume of games will contribute to injuries.

The 38-year-old said: “He felt his hamstring so we don’t know.

Lacazette, 29, has been in stunning form of late

“We have to rotate players, we have players who didn’t recover from the game on Thursday. That is the risk. You cannot change those players every game.”

Lacazette’s replacement Eddie Nketiah scored the goal deep into stoppage time that salvaged the Gunners a point against the relegation-threatened Cottagers.

Should Arsenal decide to cash in on their No9 – Roma, Sevilla and Atletico Madrid have all shown an interest.

Lacazette has scored 17 goals in 39 appearances this season, including 13 in the Premier League.