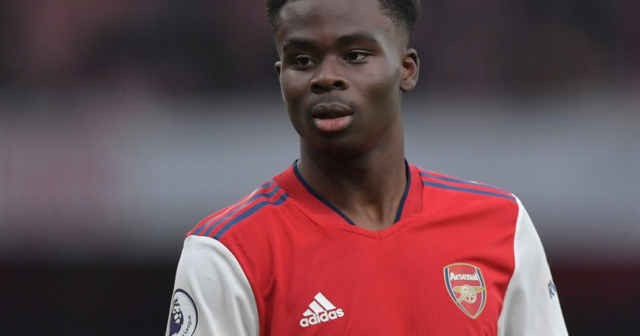 BUKAYO SAKA could be the perfect replacement for contract rebel Mo Salah at Liverpool, according to Kevin Philips.

The Reds are bracing themselves for the possibility of Salah’s exit – with contract talks stalling between the two parties.

Salah reportedly wants £380,000-a-week from the Reds, but the club are yet to agree to his demands.

The 29-year-old has got less than 18 months left on his current Liverpool contract – and an agreement between the winger and his employers isn’t looking promising at this stage.

With the Egyptian’s future at Anfield up in the air, Jurgen Klopp’s side are on the prowl for possible replacements for their superstar winger.

And that won’t be an easy task as the winger’s already amassed 23 goals in 26 games in all competitions this season alone for the Reds.

However, Philips is confident that Arsenal ace Saka – who the Reds have been reportedly keeping tabs on – can fill the Egyptian King’s boots on Merseyside.

The ex-Sunderland striker admits that Saka’s still got a long way to go to be on the same level as Salah.

But Philips reckons that Saka’s already shown his ability at the highest level – and will only get better throughout his career.

And he also highlighted that Salah himself was a late bloomer before blossoming into a world-beater at Liverpool.

In a conversation with Football Insider, Philips – who now manages Northern Premier League Division side South Shields – said: “I think he’ll get better and better, Saka. He’s still a young kid, he’s done a lot already in his short career.

“I think he’s an unbelievable talent and I think, moulded in the right way, he’ll turn out to be a top-class player.

“Whether he can go to Liverpool, if that was to happen, could he emulate what Salah’s done? It’d be very, very difficult for any player to do that.

“But he’s certainly got the attributes and qualities that he possibly could join Liverpool and replace Salah. Let’s not forget, Salah didn’t tear it up early on at Chelsea.

“For Saka, he’s developing all the time.”

But Liverpool will have to launch a preemptive bid for Saka to fend off interest from their rivals Manchester City who are also said to be chasing the youngster.

Both the Prem giants are ready to pounce on the wing wizard if the Gunners don’t qualify for the Champions League this year – which is something Liverpool and City can guarantee Saka.

And the allure of playing in the elite European competition among the world’s best players may be too much for Saka to resist.