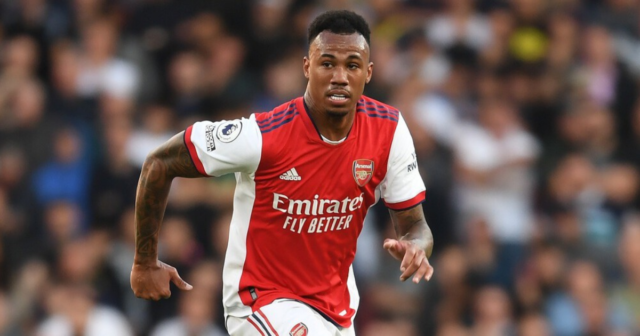 GABRIEL has revealed he rejected a transfer to Manchester United last year after Arsenal fans convinced him to make the move to the Emirates.

The Red Devils were heavily linked with signing the Brazilian centre-back from Lille but missed out to the Gunners in landing the 23-year-old.

And the defender has declared that he was influenced by Arsenal supporters to come to North London after being inundated with messages.

Speaking to talkSPORT about his switch, he said: “I’d always dreamt of playing in the Premier League.

“And everyone knows Arsenal as one of the top clubs in the world.

“It’s true that Manchester United were also interested, but I was always focused on joining Arsenal.

“The fans sent some messages in the build-up and that was very important in my decision.

“Having been here for some time now, I am certain I made the right choice.

“I am very happy here, I’ve made some fantastic friendships and I hope we can win some trophies.”

Since returning to the starting XI after recovering from his knee injury, Arsenal have won all three games with Gabriel in the team.

In that time they have conceded just once – a consolation goal for Tottenham in last week’s North London derby win.

And Gabriel has heaped praise on new centre-back partner Ben White ahead of Saturday’s away clash against Brighton.

Commenting on the £50million man, he remarked: “We’ve been playing well, training well, Ben White is a top player and I’m very happy to be playing alongside him and training with him every day.

“Things are going well, we want to keep it up.

“There’s still a long season ahead, but we know hard work pays off and we want to achieve something come the end of the season.”