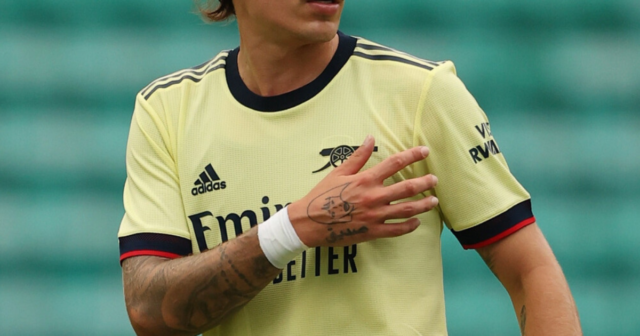 HECTOR BELLERIN’S agent has reportedly jetted into London to discuss the Arsenal right-back’s future at the club.

The 26-year-old is understood to be keen for a fresh challenge away from the Premier League after ten years spent at the Emirates.

It has been claimed that the Gunners are holding out for at least £15million for the defender who still has two years left on his contract.

Serie A champions Inter Milan have been heavily linked with a move for the Spain international to replace Achraf Hakimi.

And according to Calciomercato, Bellerin’s agent Albert Botines has arrived in England’s capital where he will speak with Arsenal regarding his client’s situation.

The Italian news outlet states that Bellerin’s representatives are hoping to thrash out a deal for the player to depart this week.

They even allege that the former Barcelona academy star has agreed personal terms with Simone Inzaghi’s side.

All there is now is for Inter and Arsenal to agree a fee, with the Nerazzurri believed to be seeking a loan with an option to buy.

However it has been suggested that Atletico Madrid could step up their interest in him should Kieran Trippier be sold.

But it is Inter that are leading the race to secure Bellerin’s services, with the club’s chief Beppe Marotta confirming he is a target.

He told Sky Sports Italy: “Bellerin is a player we are following, but I can’t say any more.”

Arsenal are willing to part ways with Bellerin as Mikel Arteta looks to bring in a new full-back to provide competition for Calum Chambers and Cedric Soares.

Norwich ace Max Aarons is said to be a target, with Bayern Munich another interested party in the Canaries youngster.