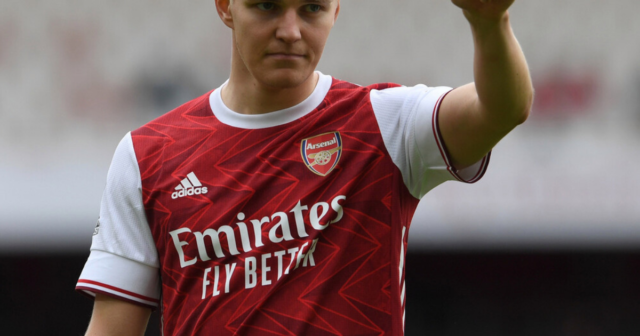 ARSENAL are still trying to sign Martin Odegaard who is unsettled at Real Madrid, reports suggest.

Odegaard spent the second half of last season on loan at the Emirates and impressed Gunners manager Mikel Arteta thanks to the potential, work rate and leadership he showed on the pitch.

Arteta wanted to extend the attacking midfielder’s stay in north London but he swiftly rejoined Real where he is fighting for a starting position under new boss Carlo Ancelotti.

According to Sky Sports, however, Arsenal haven’t given up on their bid to sign the Norway international and are monitoring his situation closely.

The 22-year-old’s chances of breaking into Ancelotti’s starting line-up this coming season are still quite slim.

According to Cadena SER, that is why Odegaard has become unsettled in the Spanish capital.

The same report claims the Norwegian appeared ‘disconnected’ with his Real team-mates during pre-season and isn’t 100 per cent happy.

That is why the former Real Sociedad loanee is now considering his options and a return to Arsenal can’t be ruled out.

The north Londoners are very keen to bring Odegaard back but are also considering other options for the No10 role, such as Leicester star James Maddison.

However, the Foxes don’t want to sell Maddison and it is understood they wouldn’t consider any bid less than £70million.

Arsenal have considered sweetening the deal by offering the likes of Reiss Nelson and Ainsley Maitland-Niles in exchange for the England international.

Nevertheless, both Odeagaard and Maddison would still require a hefty fee.