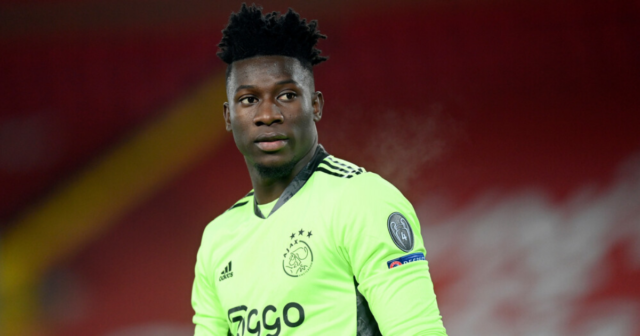 ARSENAL’s hopes of signing Ajax goalkeeper Andre Onana have seemingly gone up in smoke as the stopper has reportedly penned a deal with French giants Lyon.

The Gunners have been tracking the Cameroon international for well over a year and were said to be keen on acquiring his services this summer.

But according to reports, the north Londoners have been pipped to his signature by Lyon.

L’Equipe claim the Ligue 1 side have already reached an agreement with the keeper, who is currently serving a nine-month suspension for a doping violation.

And they claim Lyon are set to bag the Cameroonian for a meagre fee of £6.8million.

Gunners boss Mikel Arteta will be seething if Lyon have indeed bagged Onana for such a nominal fee.

The Spaniard was reportedly keen on signing the Ajax academy graduate as a replacement for Bernd Leno.

It’s understood a number of clubs have made enquiries over Leno’s availability over the last few months.

Leno, however, insists he’s more than happy at the Emirates.

When asked about a potential move away from the club, the 25-year-old German told Sky Sports: “I am still happy at Arsenal.

“Arsenal is still a big club, a big name in the world and in the Premier League.

“There is nobody in the dressing room who says: ‘I want to leave the club, I am not happy here anymore.’”

The Gunners have been busy in the transfer market this summer, acquiring the services of three new players.

Nuno Tavares, Albert Lokonga and Ben White have all moved to the Emirates, with the latter costing the Londoners a cool £50m.

Arsenal will kick off their Premier League campaign a week on Friday, travelling to the Brentford Community Stadium to take on newly-promoted Brentford.