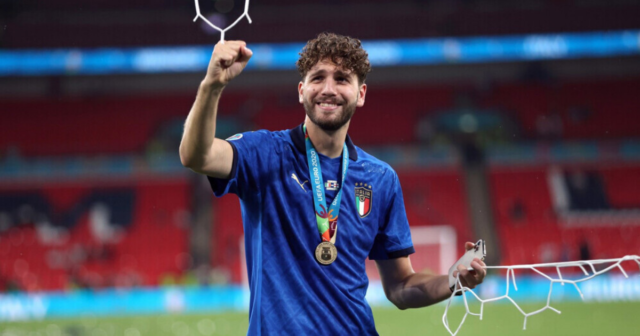 JUVENTUS are struggling to produce the funds to meet Manuel Locatelli’s asking price, according to reports.

That could act as a boost to Arsenal’s transfer hopes, as the Gunners have been tracking the Italy star since Euro 2020.

Liverpool are also said to be interested in the Sassuolo man as a potential replacement for Gini Wijnaldum.

And according to Sky Italia, Juventus are not able to meet Sassuolo’s demand of £34million for Locatelli.

The clubs have reportedly met on three different occasions to discuss the deal but have been unable to reach an agreement.

As a result, Juventus are believed to instead be keen on a two-year loan with an option to make the move permanent.

The 23-year-old will be disappointed by that development, as he is believed to desire a move to Turin above anywhere else.

But Arsenal have reportedly made a bid for the midfielder this week and could seize the initiative in the transfer battle if they meet Sassuolo’s asking price.

Also, Arsenal could benefit from the fact Sassuolo want to wrap up a move quickly as they want to reinvest in a replacement.

The Gunners have added to their midfield options with the signing of Albert Sambi Lokonga this summer.

But with Granit Xhaka’s future still unclear it is possible Mikel Arteta will want to add another body.