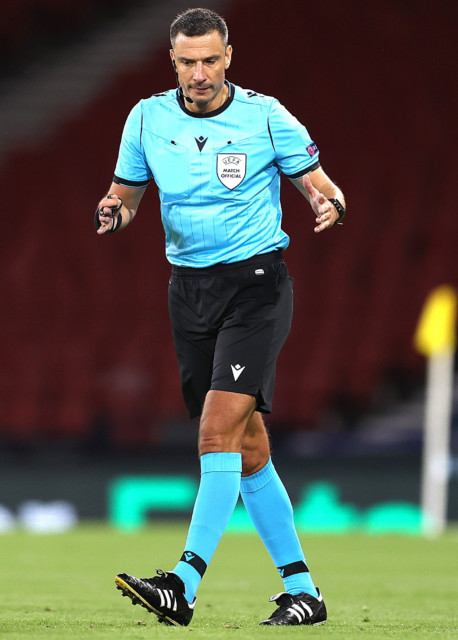 The Slovenian official has been placed in charge of Thursday’s Europa League semi-final second leg against Villarreal at the Emirates.

Slavko Vincic was questioned as a witness after 26 people were detained at a partyArsenal defender David Luiz could be out for weeks with a hamstring injury, including missing Thursday’s semi-final with Villarreal

Vincic, 41, was arrested last year by cops investigating a drugs and prostitution ring in Bosnia & Herzegovina.

He was nicked as police raided a party in Bijeljina when a total of 26 men and nine women were detained and guns, cash and cocaine were seized.

Vincic, a full Fifa referee since 2010, was later released after being questioned as a witness.

He has been a full Fifa referee since 2010 and has taken charge of matches involving Liverpool, Manchester City and new Scottish champions Rangers.

Arsenal are 2-1 down from the first leg against the Spanish side but are desperate to go on and win the competition.

They are ninth in the Premier League and 12 points off the top four with no hope of qualifying for next season’s Champions League via domestic football.

The winners of the Europa League are awarded a place in the money-spinning competition, hence Arsenal’s huge incentive to do well.

Meanwhile, Gunners boss Mikel Arteta admits defender David Luiz could be out for the rest of the season after injuring his leg in Sunday’s 2-0 Premier League win at Newcastle.

Arteta said: “We don’t know. He felt something in his hamstring so it’s not good news.

“He’s put such a shift to be back with the team for the last few weeks after the knee surgery and it’s a real shame.”

Striker Alexandre Lacazette and brilliant left-back Kieran Tierney are also unlikely to be ready for Villareal.

Meanwhile, Manchester United are 6-2 up on Italians Roma in the other semi-final with the final set for May 26 in the Polish city of Gdansk.