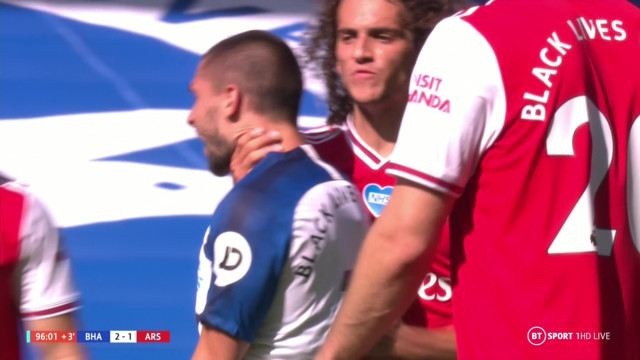 Just when it seemed the Premier League’s Project Restart might all be a little low-intensity and nicey-nicey, Brighton’s French striker served up a wonderful dollop of spite.

It wasn’t so much Maupay’s challenge on Bernd Leno, which fell into the category of ‘borderline naughty’ but ended up seriously injuring the Arsenal keeper, who gave his assailant a finger-jabbing tirade as he sat on a stretcher.

It was the fact that, after scoring a deliciously ironic 95th-minute winner, Maupay accused the Gunners — and especially Matteo Guendouzi — of lacking humility.

This charge of arrogance against Arsenal is long-running, deep-seated among fellow professionals and isn’t going away.

Rarely, if ever, do you hear the same accusation levelled against any other big-six club.

But about Arsenal, you hear it time and again, privately and publicly.

They are swollen-headed and need bringing down a peg or several, in line with their declining league position.

Opponents can accept a certain degree of swagger from clubs with a winning mentality, such as Liverpool, Chelsea and the Manchester clubs.

It is OK to be arrogant when you have something to be arrogant about. But when it comes to Arsenal — mid- table and heading for a fourth successive season without Champions League football — players keep asking ‘Who the hell do you think you are?’.

This all began when Sam Allardyce’s Bolton used to unsettle Arsene Wenger’s great teams a decade or so ago.

As Arsenal declined, it was Tony Pulis’ Stoke — labelled a “rugby team” by Wenger — who revelled in taunting them.

When Watford skipper Troy Deeney claimed Arsenal “lacked cojones” after a defeat at Vicarage Road, plenty were applauding his honesty.

While Deeney may be a famous gob-artist, the same cannot be said of Kevin Kilbane, who played against Arsenal for West Brom, Sunderland, Everton and Wigan.

Kilbane claimed “there was an arrogance and petulance among (Arsenal’s players), which was encouraged from top to bottom of the club”.

Wenger did demand extra protection for his players from referees and, as the English game became less physical, many natives resented this. 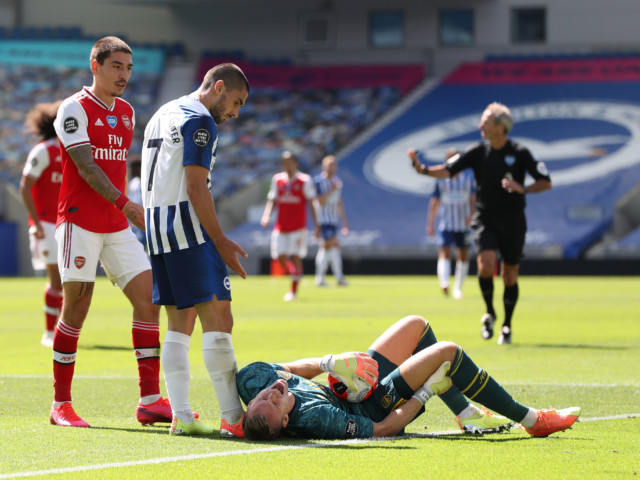 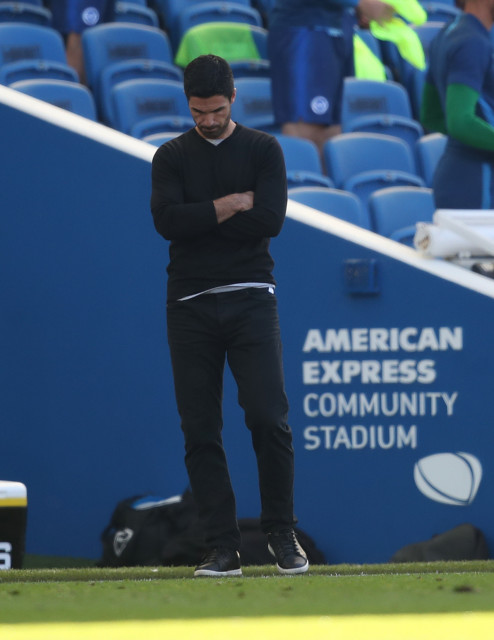 Arsenal need knocking down a peg or two

Yet these feelings about Arsenal run deeper than that and they have outlasted Wenger by two years now.

Maupay is a Frenchman, while Brighton are a decent footballing team and a progressive club.

Yet he feels the same about Arsenal because, on football’s grapevine, everyone has heard the accusations, everyone believes them and is motivated by them.

I know of one player who moved from the Emirates to a Premier League rival and was immediately told to ‘Leave your Arsenal attitude at the door’ by an intelligent and level-headed senior pro at his new club.

Perhaps, as Kilbane said, there is an arrogance about ‘The Arsenal’ which stretches from the boardroom to the terraces, where a strange sense of entitlement also dwells. During Wenger’s latter years, players were too often indulged and a holiday-camp mentality prevailed.

His successor, Unai Emery, attempted to tackle this culture but did not possess the communication skills or the force of personality to succeed.

So does Mikel Arteta recognise this problem and is he willing to tackle it? Because Arsenal are a club in need of a reboot. Next season, they will probably have no Europa League or EFL Cup to continue blooding their impressive crop of young players.

An emphasis on youth in the Premier League may be necessary and beneficial.

Fail to win at Southampton on Thursday and especially at Sheffield United in Sunday’s FA Cup quarter-final and Arsenal’s season will descend further into dark comedy.

There was piped-in booing on the BT feed from Brighton when Arsenal players confronted Maupay at the final whistle — TV chiefs will soon need canned laughter on stand-by when Arteta’s men play.

Summer departures for Mesut Ozil and David Luiz might help Arsenal’s humility levels, while even the possible sale of Pierre-Emerick Aubameyang might allow kids like Gabriel Martinelli and Eddie Nketiah to shine.

We may end up with a humbler, more self-aware, Arsenal — but, as Maupay pointed out, that may be exactly what they need.