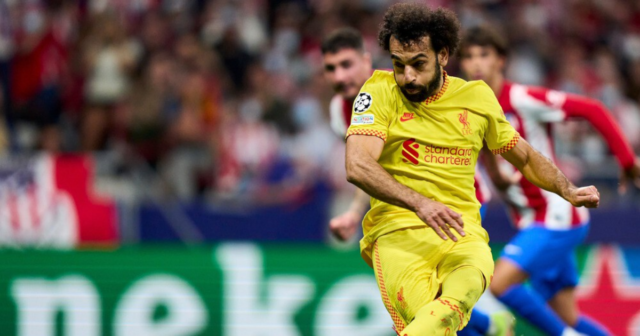 And that was even before his record-breaking night away at Atletico Madrid.

Salah scored twice in the dramatic 3-2 win in the Wanda Metropolitano.

And that meant the Egyptian became the first Liverpool player EVER to score in nine consecutive games.

And he also leapfrogged Steven Gerrard to become the top scorer in the Champions League for the Reds with 31 goals.

But ahead of kick-off on Tuesday evening, ex-Arsenal boss Wenger was singing the praises of the former Chelsea and Roma man.

The Frenchman, appearing as a pundit on beIN Sports, said: “He’s top, top class and he’s certainly the best striker at the moment in the world because he scores goals that nobody else can score.

“You have to play street football to dribble past people like that in a short space.

“Overall, I believe as well that he is very intelligent because the sign of players that always improve is the intelligence.”

With his double last night, Salah moved on to 12 goals in 11 appearances across all competitions this season – including five in three in Europe.

Incredibly, he has failed to score in just one Liverpool match, the 2-0 win over Burnley way back on August 21.

Within that stunning run are two wondergoals.

Wenger referenced his incredible dribbling ability and he showed that to full effect with his stunning solo efforts against Manchester City and Watford.

Both goals are goal-of-the-season contenders – and maybe even could be nominated for the Puskas Award.

Wenger’s statement that Salah is the best forward in the world could be reflected in the Ballon d’Or voting.

The Reds hero was one of 14 Premier League stars named in the 30-man shortlist for this year’s award – and Salah could be in with a chance of winning.

He is fourth favourite, behind Lionel Messi, Robert Lewandowski and Jorgingo.

Winning the prestigious gong would certainly give him further bargaining power amid contract talks over a new £400,000-a-week deal at Anfield.

Did you miss our previous article…
https://www.sportingexcitement.com/football/premier-league/thomas-tuchel-claims-chelseas-97-5m-star-romelu-lukaku-is-mentally-tired-after-being-overplayed