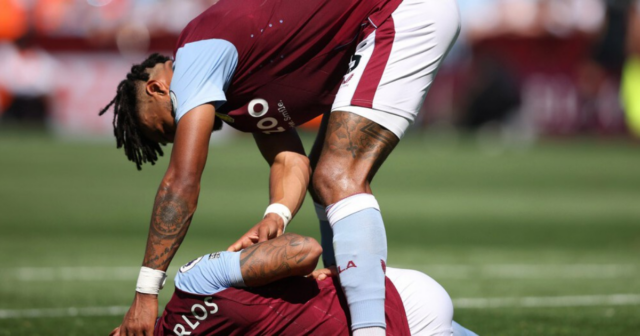 ASTON VILLA have been dealt a HUGE blow with reports suggesting new boy Diego Carlos is set for a long lay off on the sidelines.

The £26million singing from Sevilla was forced off in stoppage time in the 2-1 win over Everton with an ankle injury on Saturday.

And according to the Mirror, the Brazilian defender was seen leaving Villa Park on crutches wearing a protective boot.

Sources have said that it is feared that Carlos has ruptured his achilles and faces the rest of the year out.

If it is confirmed, it is unlikely he will play again this term and will require surgery and several months of rehab, before a possible return to first team action before the end of the season.

That has forced Aston Villa’s scouting network to find an alternative, the report continues.

They are said to be drawing up a list of targets before the transfer deadline ends on September 1.

Carlos’s injury put a dampener on Steven Gerrard’s side earning all three points against the Toffees to earn their first three points of the season.

After the game, Gerrard said: “I’m extremely happy with the win and the performance but, if we happen to lose someone who’s so important to us, that could tarnish the win.

“We’re going to send him for an MRI scan but it doesn’t look good right now.

“I’m worried about it. It’s around the ankle, Achilles area. You can see by the player and the man that he’s not the type to go off easy.

“He looks concerned with it and the medical staff seem concerned and that’s the reason why I’m worried about it.”

Did you miss our previous article…
https://www.sportingexcitement.com/football/premier-league/west-ham-captain-declan-rice-apologises-to-fans-on-twitter-after-missing-crucial-penalty-in-nottingham-forest-defeat/