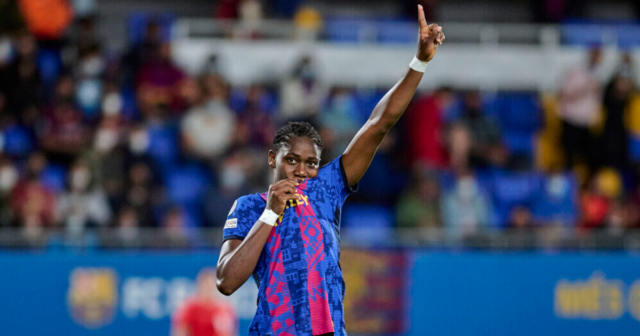 A clinical strike from ex-Gunner Asisat Oshoala was among the goals that saw the WSL aces dispatched 4-1 in an intense Women’s Champions League duel.

The defeat leaves the Gunners third in their group and in a need of a win to aid their quest to reach the contest’s quarter-finals.

And it sees Barca go second behind German side Hoffenheim who crushed Danish outfit HB Koge 5-0.

Arsenal boss Jonas Eidevall said: “Barcelona played in a way where they really denied us a lot of space and time when we win the ball double in the first half.

“On just on a few occasions we succeeded in playing the ball out to toward our open spaces and if you watch the second half in comparison, we did that many more times.

“And, of course, that’s sometimes how football is. We played a team that’s better than any other opponent we have played so far this year.

“That will prepare us for the future, and we will learn from it, and we will need to raise our standards and hopefully do better.”

Arsenal, so dominant in domestic competition, spent much of the game chasing the ball, maintaining five at back when sitting deep.

Their hosts, intent on getting off the mark quickly and defeating their third WSL team this year, enjoyed 70 per cent of possession.

That dominance bore fruit with Mariona Caldentey opening the scoring moments after the half-hour mark.

And the ex-Arsenal ace was involved in Barcelona’s second goal of the evening minutes before half-time.

The Nigeria striker hovered around Arsenal’s defence, before jetting down the right and into the box and cutting a pass back for Alexia Puttellas to net from eight yards out.

The second half saw Barca extend their lead with Oshoala getting on the scoresheet for the hosts’ third.

The scoreline prompted Eidevall to shuffle his cards in the 56th minute with Nikita Parris, Caitlin Foord and Tobin Heath coming on for Beth Mead, Vivianne Miedema and Katie McCabe.

And it was a tactical move that worked to great effect with Parris seeing her shot cleared off the line in the 74th minute before Frida Maanum nabbed a goal for the visitors moments later.

A superbly placed Tobin Heath cross led to the Norway ace bundling the ball over the line.

Barca had a couple more attempts on goal before super sub Lieke Martens wrapped up the win.

And she did so by exploiting Arsenal’s high line with a well-timed run evading Leah Williamson to net Barca’s fourth.

The Catalan giants came close to increasing their goal tally to five with the ref pointing to the spot after Alex Puttellas hit the turf following a Jordan Nobbs tackle.

And Zinsberger pulled off an impressive save parrying the ball out of danger with the game ending 4-1. 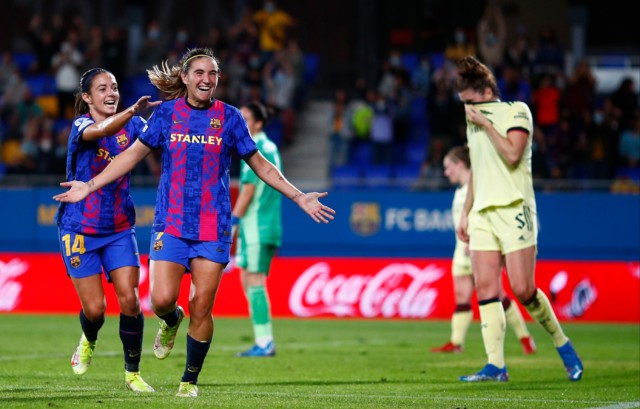 Barca midfielder midfield ace Caldentey said: “There’s a long way to go (in the competition) and there is much to do, but what we have to do is concentrate on ourselves.

“Our expectation is to be loyal to our style and to play the way we know how to play. It doesn’t matter who our opponent is.

“If we play our game if we feel comfortable, and if we play the one, the way we want, I think that we’re a very difficult team to defend (against).”

Did you miss our previous article…
https://www.sportingexcitement.com/football/premier-league/cristiano-ronaldo-shared-3-5k-a-week-fishing-village-home-with-georgina-rodriguez-and-kids-during-coronavirus-pandemic