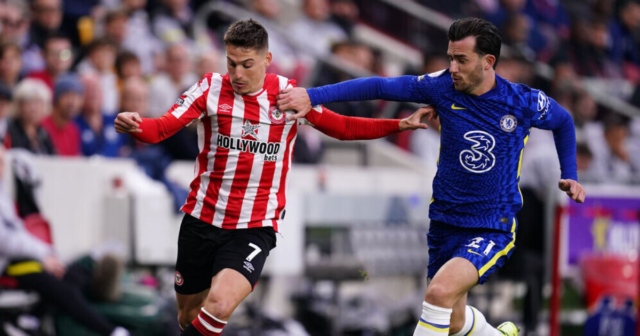 SAT IN Brentford’s analysis room preparing for their clash against Leicester, there is a sense of déjà vu for Sergi Canos.

It was around eight years ago that the Spaniard arrived on Merseyside aged 16 to sign for Liverpool – who were being led at the time by Brendan Rodgers.

The teenage talent soaked up everything Rodgers had to offer, from his tactical knowledge and fresh ideas to his love for developing young players.

Almost a decade on and Canos has spent this week watching defensive patterns and attacking movements he has certainly seen before.

But this time, he is working out how to disrupt them in a Bees shirt.

Speaking to SunSport ahead of welcoming the Foxes to west London on Sunday, he said: “Brendan had a very good impact at Liverpool.

“He wanted a lot of academy players training with him regularly. He was really good with us. He gave us hope, if you worked hard like Raheem Sterling did you would get your chances.

“I’m not surprised about what he has now done at Leicester. The way he likes to play is how football now is. He was revolutionary in that respect. Ahead of his time.

“He likes to press and have the ball.

“His teams can have good spells bad spells but they have a consistency and patterns and a plan and you can see that. I can still see that now from when I worked with him.

“He has improved since then, obviously like I have as well.”

Canos, 24, is also set to be reunited with Leicester midfielder James Maddison – his old roommate during their brief time together at Norwich.

Canos explained: “We would both be in the group of 20 travelling to games, but the coach then chose his squad of 18, and Madders and me were always the two left out.

“They were hard times but we had a really good relationship and we supported each other.”

This fixture then offers a chance for Canos to reflect on his journey that now sees him as a Premier League regular playing in one of the most exciting newly promoted sides ever seen.

From swapping the Barcelona academy for Liverpool in 2013, to shining on loan with Brentford, to making his top flight debut under Jurgen Klopp in 2016, and then his decision to leave the comfort of the Reds’ Under-23s in a make-or-break move.

One that tested his relationship with his grandfather.

Canos recalled: “He wasn’t happy. He was scared. Everyone back home thought Liverpool was a big club and the stability they can give you is a lot bigger than at a Championship club.

“But if there are no opportunities, your career is going downwards. I wasn’t going to be who I am today if I stayed. I told him I had to risk it.”

He has certainly proved his grandfather wrong. After a failed switch to Norwich in 2016, he returned to Brentford a year later – this time permanently – and has not looked back since.

Canos laughed: “My grandfather has definitely forgiven me now.”

Now, the scorer of Brentford’s first goal back in England’s top division for 74 years on their opening day 2-0 victory over Arsenal is focused solely on the present day.

Brentford’s start to the campaign – 12 points from their opening eight games – has shocked the division, but not as much as their seemingly unmatchable team and club spirit formed under inspirational coach Thomas Frank.

It has been compared to that of opponents Leicester during their stunning 2015/16 title winning campaign under Claudio Ranieri. Canos can see the similarities.

He added: “You cannot buy something like this. You have to create it over time. It is working and it is getting us results in the Premier League.

“We have been working so hard to get to this league and we are here now. We can’t disappoint people. It is our responsibility to show we can compete.

“We can compete against Chelsea. We drew against Liverpool. We beat West Ham who finished in the top six. But without that spirit, we are no one.”

Yet Canos refutes the claim that Brentford enjoy being underdogs. He said: “We don’t care.”

So, have the early season expectations been replaced by ones that involve a top 10 finish, European football or even a Leicester-style fairy tale?

Canos pauses, before saying: “If we start thinking about Christmas time or not getting relegated or finishing mid table, it’s pointless.

“My mum always says to me you can’t fix a problem when there is no problem. If we think about the future rather than now we are wasting energy.

“If we put all our energy into our next game, that’s everything we can hope for.”