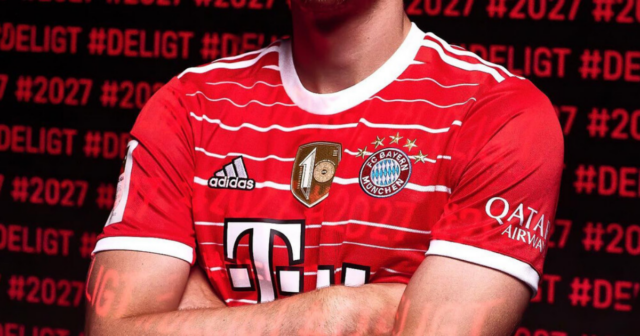 BAYERN MUNICH have confirmed the signing of defender Matthijs de Ligt from Juventus.

The 22-year-old Holland international had been heavily linked with Chelsea after talks over a new deal with Juve broke down.

Bayern have confirmed the signing of Matthijs de Ligt

But he has now snubbed the Blues in favour of sealing a transfer to the German champions in a deal which runs until 2027.

Speaking about the move, he told the club website: “I’m very happy to become a player for this great club.

“I felt the genuine appreciation from the sporting management, the coach and the board right from the start, which convinced me.

“On top of that, FC Bayern is a brilliantly run club with big aims. I’m very glad that I’m now becoming part of the FC Bayern story.”

Meanwhile, legendary keeper and Bayern’s current CEO Oliver Kahn was glowing in his praise for the young defender.

“Matthijs de Ligt has impressed at the highest international level, not just with his technical qualities but also as a character who leads in all his teams,” he said.

“At his young age he’s already learned about taking responsibility.

“A strong team doesn’t just require a strong attack, and with this signing we’re really raising our defence to the top level.”

De Ligt made 117 appearances for Juventus, winning the Serie A title and Coppa Italia.

Prior to that with Ajax, he won the Eredivisie title, reached the Champions League semi-finals and Europa League final.

He has also already amassed 38 caps for Holland, making his debut at 17 years of age – the youngest player to feature for the Dutch since 1931.

In this article:bayernmunich, hehas, newdeal