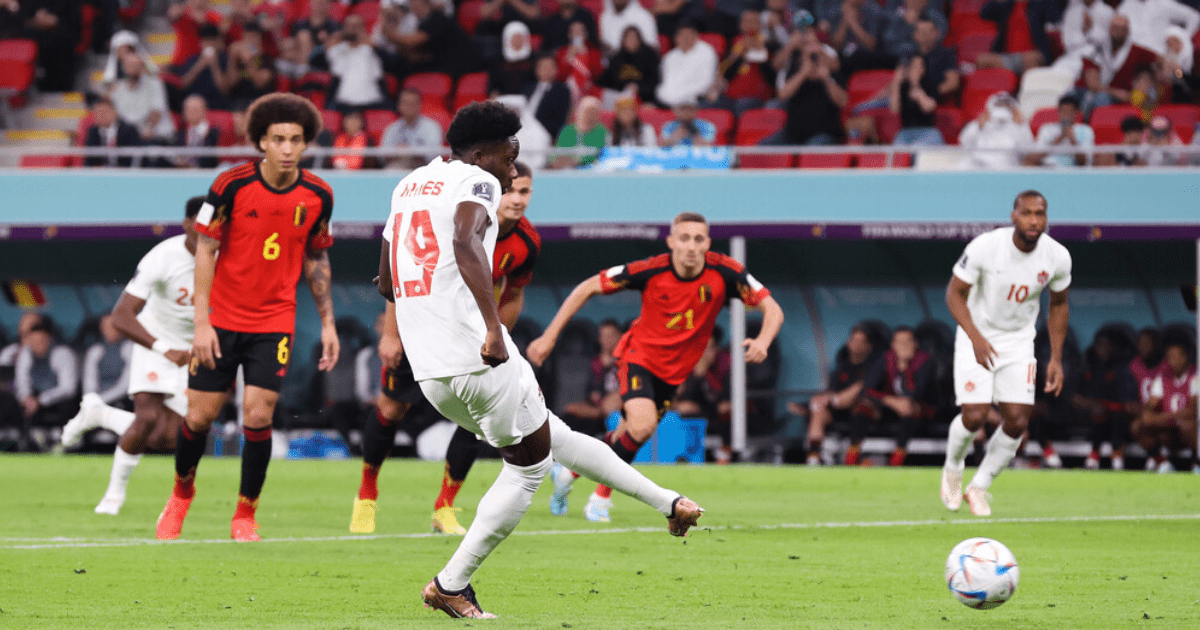 UNLUCKY anyone who had Belgium in the sweepstake then.

Yeah yeah, they’re up and running thanks to Michy Batshuayi, but boy were they rotten. 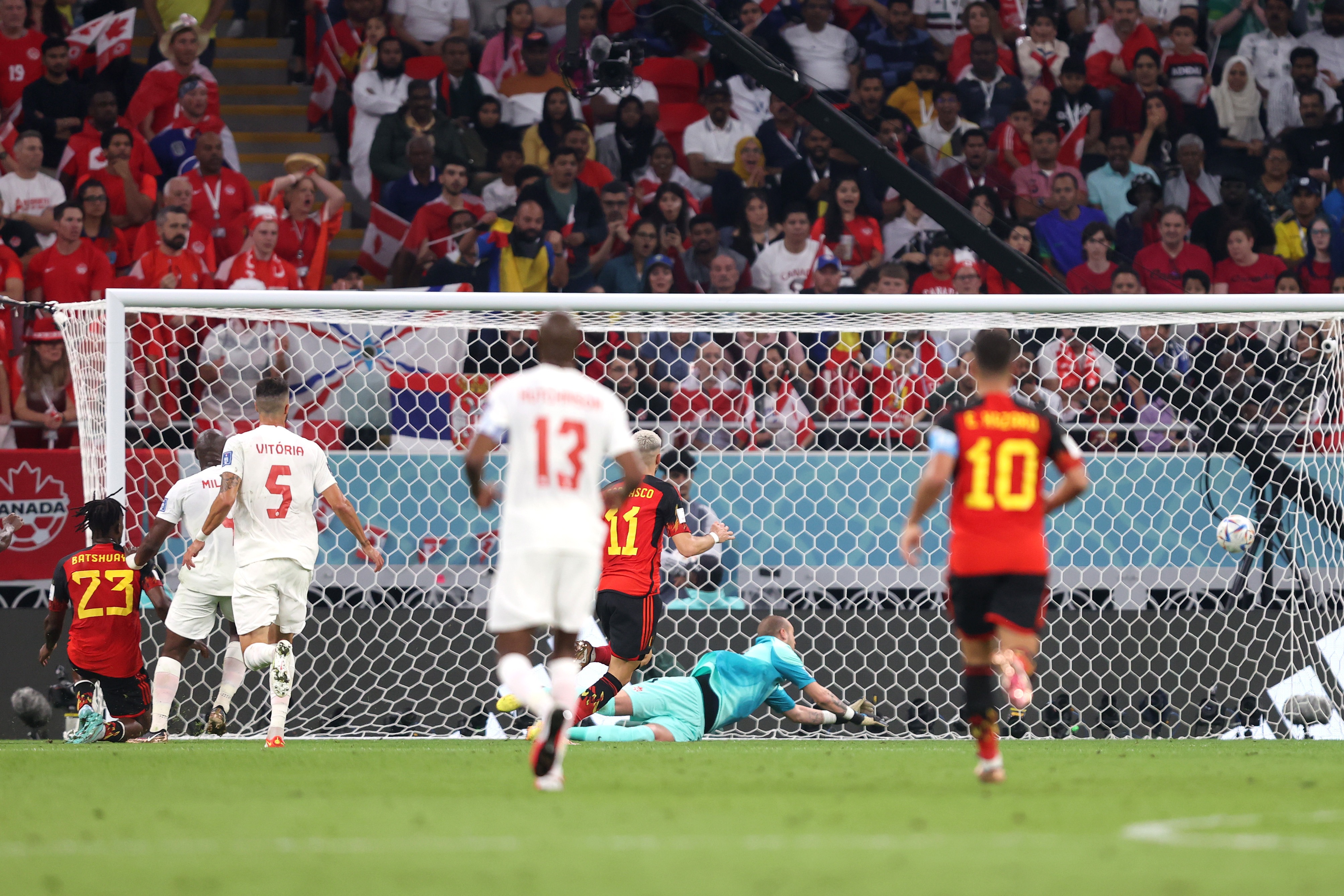 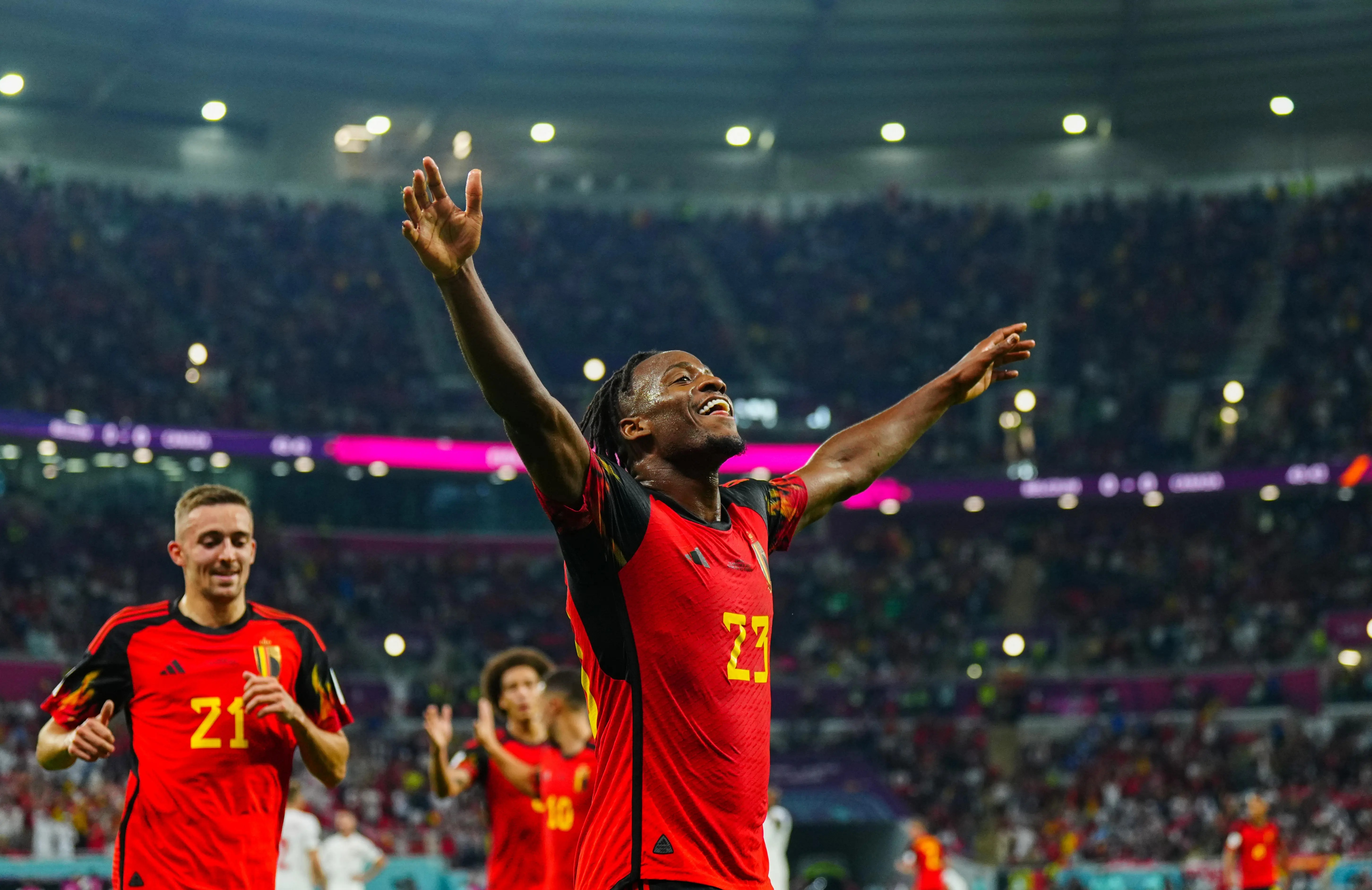 If anyone looks to have a Golden Generation right now, it’s Canada.

It might not happen for them this time, but the world needs to watch out when on home soil in 2026.

Ranked 41st in the world, 39 places below the supposed heavyweights, Canada had 21 shots to bang-average Belgium’s nine.

This result was so cruel on the minnows but when you miss a penalty and can’t defend a simple ball over the top, it’s hard to complain too much.

Alphonso Davies, one of the world’s rising stars, butchered the big moment just 10 minutes in.

Exceptional with everything else, the 22-year-old’s spot-kick lacked any conviction and was gobbled up by Thibaut Courtois.

Batshuayi’s sucker punch just before the break settled it, but that doesn’t tell half the story.

While Argentina and Germany are hiding away in shame after Saudi Arabia and Japan did for them, Roberto Martinez’s side shouldn’t be feeling much better about themselves.

For a team of so-called stars, they really were terrible.

Kevin De Bruyne is the only genuine world class player left in the ranks…and he was the worst of the lot!

You can’t keep a great man down and nobody would be surprised if the Manchester maestro turns it on against Morocco and Croatia.

Granted, they should now breeze the group barring a complete and utter capitulation – but nobody should fear them based on this shoddy showing.

Martinez’s squad had a combined 104 World Cup matches heading to the Ahmad bin Ali Stadium, more than any other side in Qatar.

Experienced or just old, knackered and ready for the tip? Well it didn’t take long to find out.

Young, hungry and with pace everywhere you looked, Canada tore into the dawdling Belgians in their first first World Cup clash since 1986.

They were already under the cosh by the time a penalty was given nine minutes in following a VAR review for Yannick Carrasco clearly handling Tajon Buchanan’s sweeping volley.

On his World Cup bow, star man Davies’ effort was weak, allowing Courtis to flop down to his right and save comfortably.

It was the only mistake they made in a rollicking opening 45 minutes.

If Martinez thought that would shock his boys into gear, he was sorely wrong. 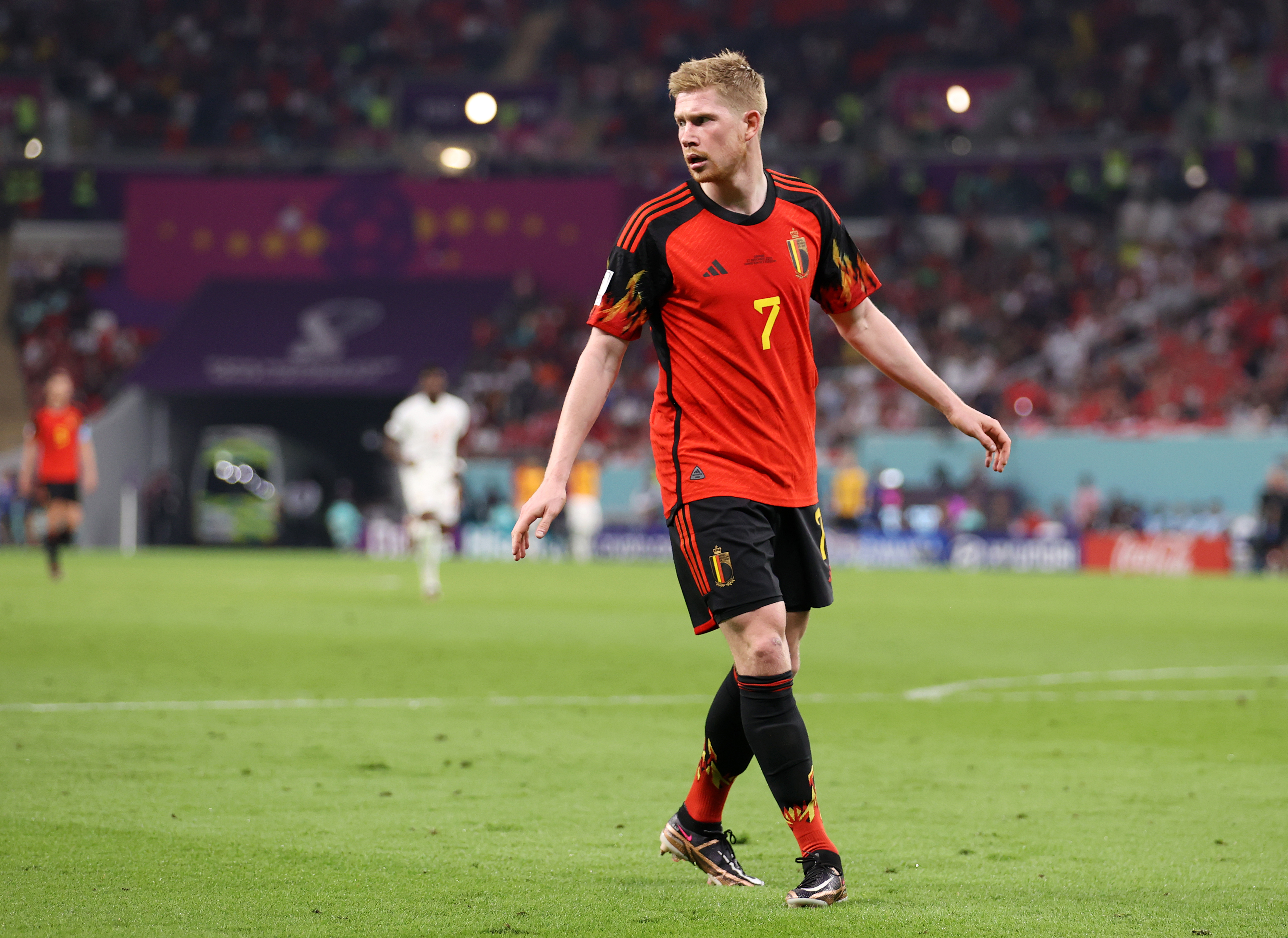 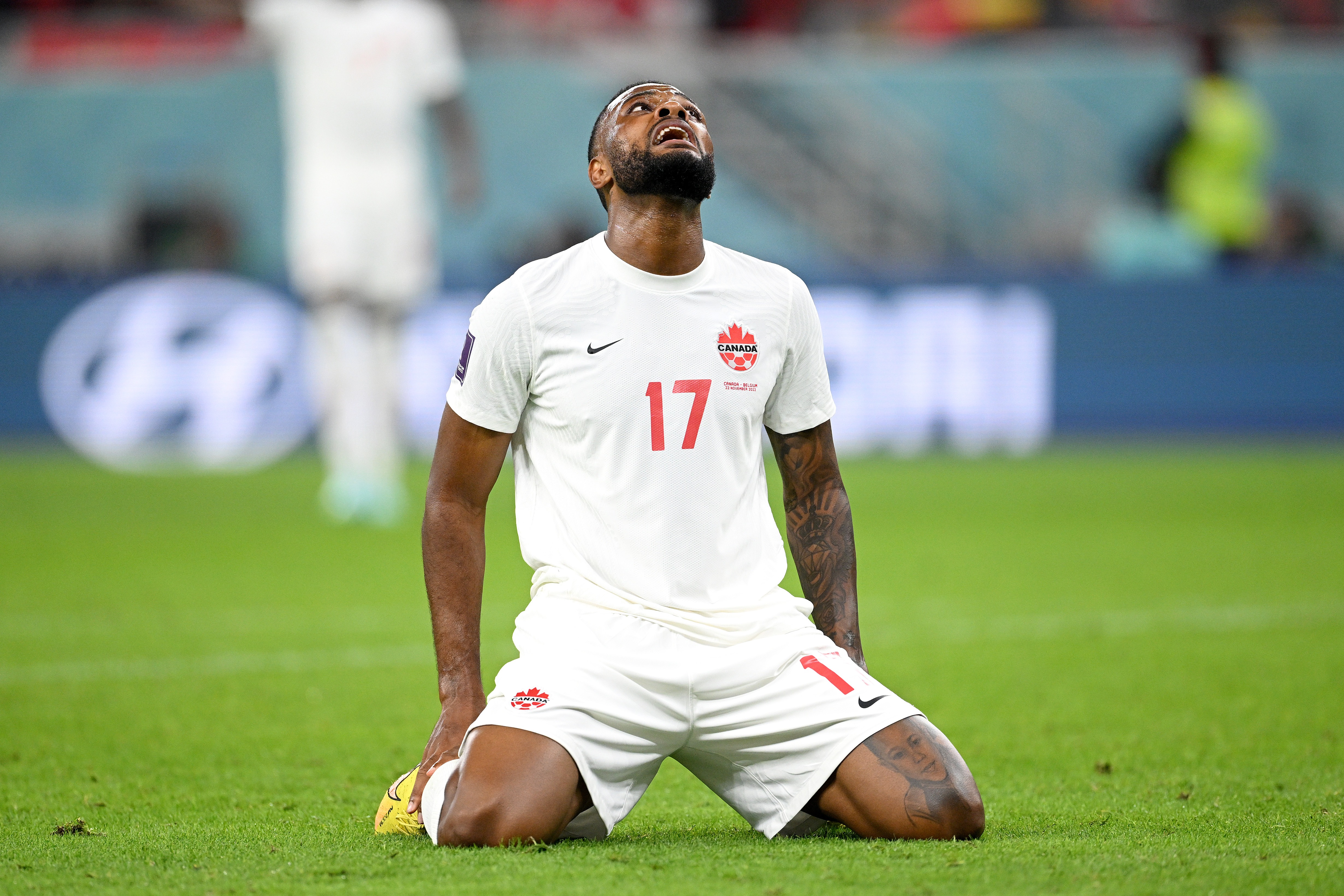 Canada produced a superb display but somehow failed to score

The pressure was unrelenting and Belgium were so frazzled that even De Bruyne was misplacing simple passes.

Bayern prodigy Davies put his miss behind him and was running the show on the left, leaving Martinez shell-shocked.

Consett-born Herdman was a bundle of energy, roaring his lads on with his not-quite-Geordie twang.

Belgium could not do the simple things so went for the simplest… a good ol’ punt from back to front.

Toby Alderweireld’s hoof looked harmless yet Batshuayi somehow got on the end of unchallenged and sweetly swept home into the far corner off his left peg after 44 minutes.

Thoroughly undeserved yet the kind of expert finish Canada lacked.

But they kept coming and coming in injury time, with Buchanan flashing a great low cross over.

Martinez was unsurprisingly still livid after the goal and surely delivered a rocket at the break.

Anonymous Youri Tielemans and Carrasco were hooked for Amadou Onana and Thomas Meunier.

The only question out in the desert was whether the Canadian could keep up their remarkable intensity.

Well, 100 seconds after the restart and another brilliant chance – only for striker Jonathan David to nod wide from six yards.

Gaps opened for Belgium as Les Rouges pushed, but the last-ditch defending was remarkable.

From back to front they were a credit to the 5,000 supporters out here in Doha and 38 million back home – and they will still fancy their chances of progression.