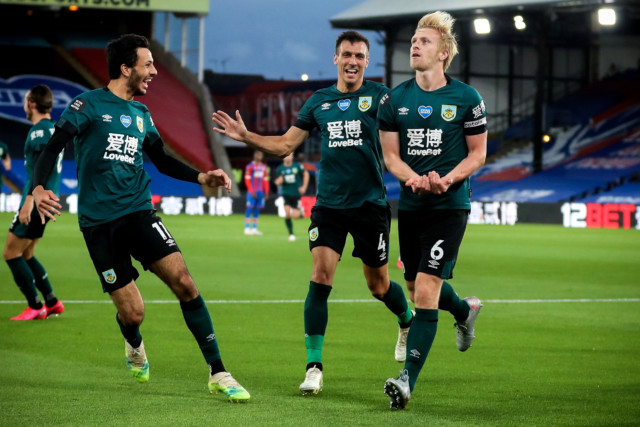 BEN MEE put his personal trauma behind him to lead Burnley through a tough week on and off the pitch.

The Clarets skipper became a dad for the second time last month when wife Sarah gave birth to their daughter 16 weeks prematurely.

Olivia Grace is now six weeks old and doing well — but she remains in hospital with her mum.

And centre-back Mee showed he was the daddy in Monday’s 1-0 win at Crystal Palace by scoring his first goal since 2017 — and then bringing out the cradle celebration.

Mee, 30, said: “It’s been an emotional time for us as a family but she’s growing stronger each day.

“She’s six weeks now so it was nice to celebrate that as well.

“She’s growing well and the NHS have been fantastic for us.

“It’s going to be a long road but hopefully everything will be OK.

“The family were watching back home which was nice.”

Mee showed his leadership qualities off the pitch last week when he spoke out to condemn the ‘White Lives Matter Burnley’ banner that was flown over the Etihad.

And after all the controversy surrounding that and the emotions he has endured at home, he admits it is good to be playing football again.

Since their 5-0 humbling against Mee’s old club Manchester City, the Clarets have chalked up back-to-back wins over Watford and Palace.

Now they are gearing up for a Roses clash against Sheffield United at Turf Moor on Sunday, with both teams eyeing a European spot.

Mee helped Burnley to qualify for the Europa League two years ago and reckons they could do it again.

Proud day walking out with the little guy for the first time!.. Thanks for all the support again, another premier league season to look forward too!

He said: “Why not? It’s a big game Sunday now, we are looking forward to it.

“Playing like we are doing, there is no reason why we can’t go and get three points.

“We will keep going as we are doing and we’ll give everything we’ve got.”