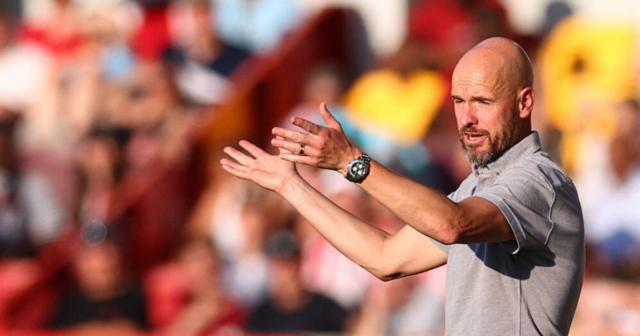 ODDS on Erik ten Hag being the first Premier League manager to be sacked have been SLASHED.

Ten Hag, 52, is now third favourite to be the first top-tier boss to get the chop this season after a 4-0 defeat at Brentford.

Paddy Power have even given an EARLY PAYOUT on the Dutchman to go.

Bookies made the decision after Manchester United’s disastrous first half in West London.

Defensive woes from United’s stars handed the Bees a FOUR goal lead at the break.

And at the break, spokesperson Sam Rosbottom said: “We’ve just witnessed one of the worst halves of Premier League football in Manchester United history.

“The reds have well and truly been stung by the Bees and things aren’t looking good for Erik ten Hag.

“It’s safe to say it’s been a disaster start for the new United boss, who in 135 minutes of Premier League football has seen his odds to be the first manager to leave his role slashed to 13/2, having been 33/1 before the start of the season.

“Finding themselves four goals down after just 35 minutes, Manchester United need a miracle to get back in this one, at half time they are 80/1 to turn the humiliating deficit around and somehow win the match.

“It looks like it will be two defeats in two for the new era at Old Trafford.”

Two David de Gea mistakes lead to a Brentford head start after the first quarter of an hour.

And the hosts scored a third through Ben Mee, who bundled in from a corner.

Bryan Mbeumo then finished off a sweeping Bees counter-attack to make it 4-0 within 35 minutes.

The home supporters were buzzing in West London as Thomas Frank’s team took a hefty lead.

Man Utd fans were resigned to another humiliating defeat at half time, and many are saying that RELEGATION may be on the cards.

Did you miss our previous article…
https://www.sportingexcitement.com/football/premier-league/arsenal-in-talks-with-youri-tielemans-agents-for-months-but-still-yet-to-make-offer-for-ace-whos-free-next-summer/