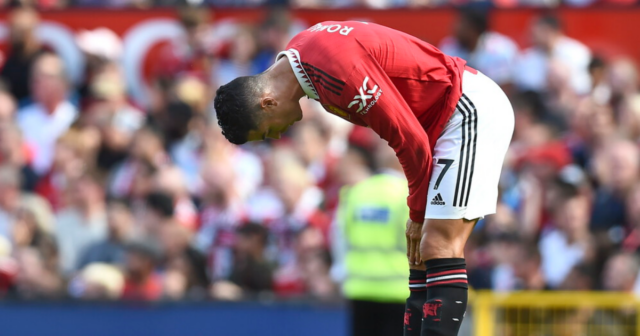 MANCHESTER UNITED are in need of a much better performance than the opening Premier League weekend when they take on Brentford THIS SATURDAY.

A quickfire double from Pascal Gross was enough for Brighton to complete the first major upset of the season.

And it was horrible scenes off the field too as a shocking brawl broke out between two United fans in the stands.

However, the Red Devils have the chance to put all of that to bed when they take on a Brentford side who they have recently had some joy against.

But the Bees will be buzzing as they performed a heroic comeback to rescue a draw against Leicester last Sunday.

What time does Brentford vs Manchester United kick off?

What TV channel is Brentford vs Manchester United on and can I live stream it?

Brentford boss Thomas Frank was forced to be without Kristoffer Ajer, Ethan Pinnock and Sergi Canos due to leg injuries.

And the trio are expected to miss out on the Bees’ first home game of the season too.

Elsewhere, Erik Ten Hag would have been distraught to suffer a defeat on the opening day of the season.

However, the Manchester United boss was able to welcome back English duo Jadon Sancho and Luke Shaw.

Whilst Portuguese icon Cristiano Ronaldo came on in the 53rd minute and got some minutes in his legs.

But the game came too soon for Anthony Martial who will need to be assessed ahead of the trip to Brentford.

Did you miss our previous article…
https://www.sportingexcitement.com/football/premier-league/granit-xhaka-reveals-how-freak-mikel-arteta-saved-him-from-the-arsenal-scraphead-and-convinced-him-to-stay/