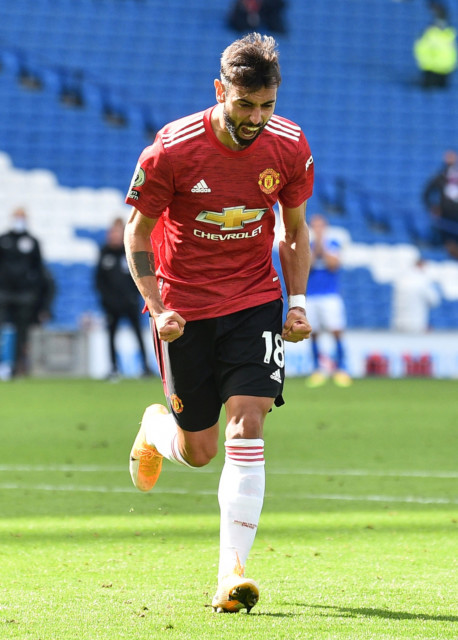 But even in the glory days of ‘Fergie Time’, he never managed a decisive goal AFTER the final whistle was blown.

Bruno Fernandes was the Manchester United matchwinner in a dramatic game 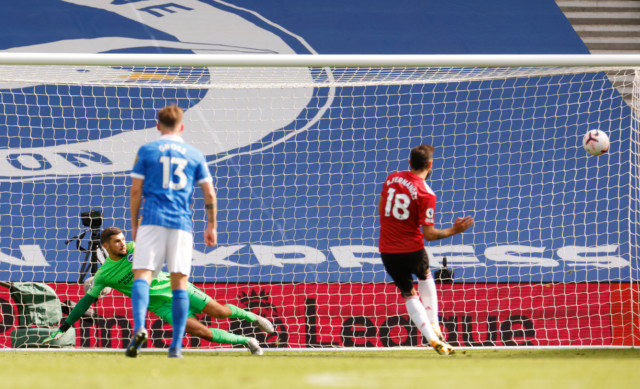 Bruno Fernandes did just that to settle an afternoon of glorious
bedlam and hand Manchester United an extraordinarily lucky victory.

When Solly March – who had just netted a 95th-minute equaliser –
cleared a Harry Maguire header off the line, ref Chris Kavanagh blew the final whistle.

Yet he was then persuaded by VAR official Simon Hooper to consult his pitch-side monitor and award a penalty for handball against Neal Maupay. 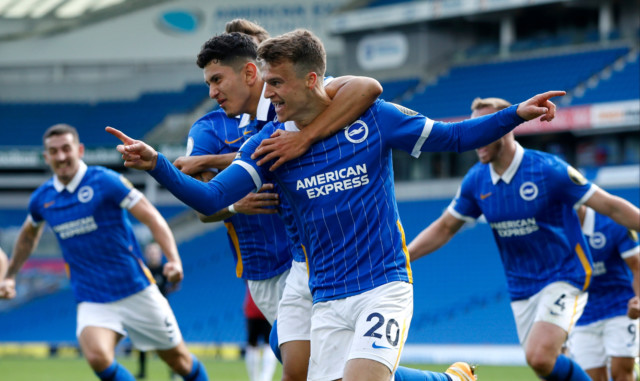 Solly March’s 95th minute winner looked to have settled it

And all this after Brighton became the first team to hit the goal
frame FIVE times in a Premier League match since Opta stats began 17 years ago – with no team ever previously managing four.

Graham Potter’s men struck both crossbars and three of the four posts and were also denied by VAR when they had a debatable penalty award overturned.

So to say that United got lucky to claim this comeback victory is a vast understatement.

A Lewis Dunk own goal and a brilliant Marcus Rashford effort had
cancelled out Neal Maupay’s spot-kick opener.

But United were fortunate to avoid back-to-back defeats at the start of a Premier League campaign for the first time in 28 years asn Brighton enjoyed more possession and many more scoring opportunities. 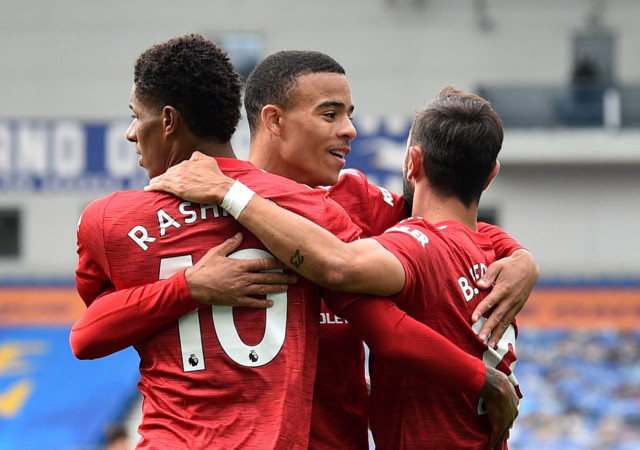 Solskjaer ended up with five at the back and two defensive midfielders as United clung on for dear life.

It was a crucial win to lift the mood of despondency around Old
Trafford – yet the performance did little to calm those supporters
urging United to get busy in the transfer market.

Solskjaer sounded confident that their opening defeat by Crystal
Palace had simply been a blip, a result of United starting their
season a week late and being caught cold.

But United began tentatively here, with Brighton purposeful and the hosts almost went in front on nine minutes when Leandro Trossard turned and hammered a shot against the post. 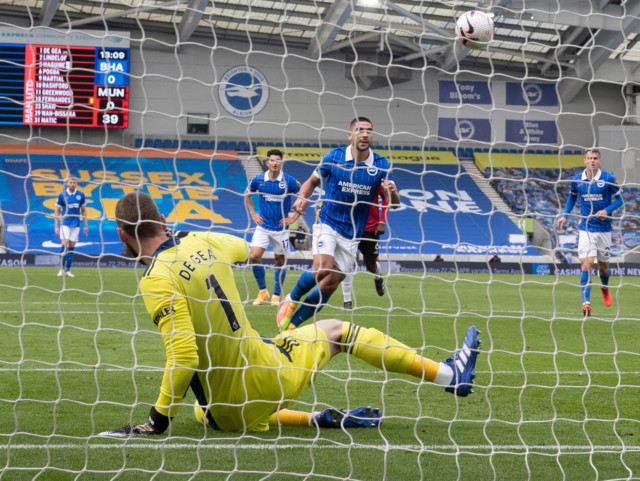 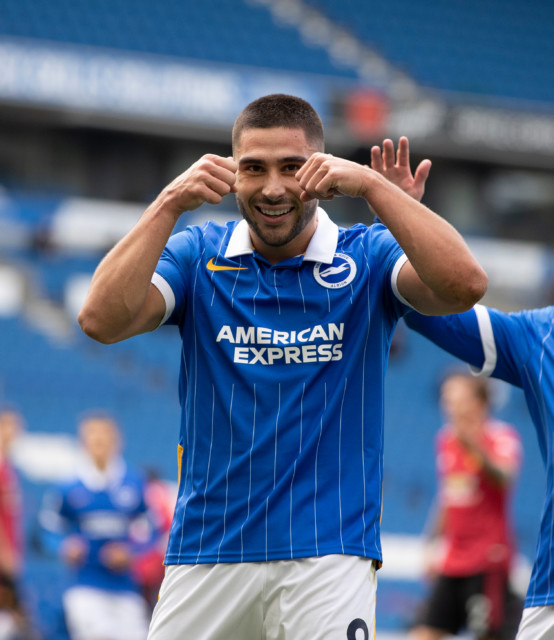 But having hit one upright, Trossard then shook the other, another
turn on the edge of the box followed by a low drive which had David De Gea beaten.

Then the Spanish keeper pushed an Adam Webster header away onto the bar with United rocking. 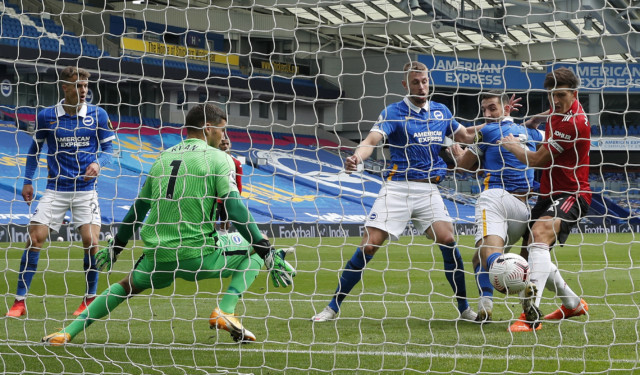 They might have had the opener on 33 minutes when Anthony Martial toasted Ben White and supplied Marcus Rashford, who squared for Greenwood to shoot home only for an offside flag to deny him.

Yet it was Brighton who took a deserved lead five minutes before the break when Bruno Fernandes – who had won and converted a fair few spot-kicks last season was penalised for tripping Lamptey.

Fernandes, who had already been booked, was fortunate to escape a second yellow but Maupay was as cool as the sea breeze with a dinked slow-motion spot-kick.

United were back on terms within three minutes, though, as Solly March chopped down Luke Shaw and Fernandes delivered a forceful free-kick to the back post where Nemanja Matic forced it back into the centre and Lewis Dunk, under pressure from Maguire, prodded into his own net.

Solskjaer’s men had a huge let-off straight after the restart when Aaron Connolly fell under pressure from Paul Pogba and ref Chris Kavanagh pointed to the spot.

VAR official Simon Hooper told Kavanagh to take a look at his pitch-side monitor and with Maguire yelling ‘Come on Chris, it’s obvious’, the ref decided he had made a clear error, when in truth the decision could have gone either way.

Yet VAR evened it up almost immediately, ruling out a Rashford effort, side-footed home from a Martial cross, for a marginal offside call.

Rashford did not take long to muster an effort which no official, in Brighton or Stockley park could rule out.

Fernandes pierced Brighton’s high defensive line with a sweeping and Rashford did a comprehensive mincemeating job on Ben White, beating then centre-half once, turning down the opportunity then beating him again before thumping home.

The contest was still wide open, thought and Brighton soon struck the woodwork for a fourth time when Maupay fed March who drilled against the inside of the far post.

Pogba, who’d had one of his semi-detached afternoons, was dragged off to make way for Fred as Solskjaer looked to shore up.

Then Trossard battered a shot against the crossbar to bring up Brighton’s extraordinary woodwork stat and De Gea denied Trossard from close-range in injury-time.

But March headed home from a Lamptey cross on 95 minutes but there was time for one more United attack – and for all hell to break loose.