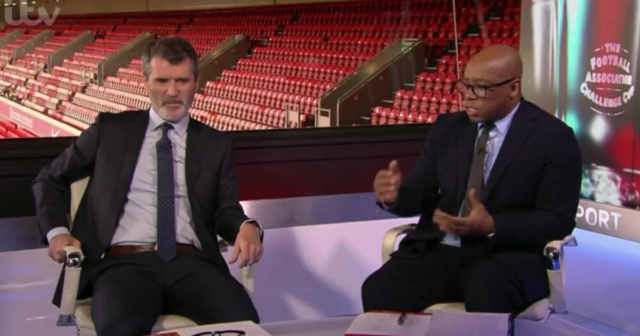 Keane’s former Arsenal adversary and fellow pundit Wright was conducting an interview with Boreham Wood striker Adrian Clifton who he has been mentoring over the last 13 years.

Wright and Clifton initially met in 2009 when the fallen ex-Gunners academy star featured on the Arsenal legend’s ‘Football Behind Bars’ show as he served a prison sentence in a young offender’s institution.

But under Wright’s guidance – Clifton’s gone from a football reject into a FA Cup hero with the non-league side who have cruised into the FA Cup fifth round where Everton await – after disposing of AFC Wimbledon and Bournemouth in the previous rounds.

And while Keane and Wright were commentating on Liverpool’s 3-1 FA Cup win over Cardiff – the pair were shown Wright’s interaction with Clifton after his career turn-around.

“You gave him a bit of hope. Brilliant stuff. Absolutely brilliant.”

Former Man United hardman Keane has built a reputation for himself over the years for his no-nonense approach on and off the pitch.

From jail to international football within 8 years, with help from Ian Wright

One of the men he helped was @A17Clifton

Adrian turned his life round, established a career in football and is now in the 5th round of the FA Cup

Here's the message he had for Wrighty pic.twitter.com/OkjiQiXApv

As a pundit Keane’s launched a number of scathing attacks on players for a range of reasons including poor performances and showing bad attitudes.

Not even stars at the Irishman’s former club United have escaped his ruthless wrath in recent times.

Earlier this month, Keane brutally ripped into the Red Devils and claimed the squad lacked ‘leadership and character’ after they crashed out the FA Cup to Middlesbrough.

But Sunderland’s crop of stars will be hoping Keane can mentor them the same way Wright has Cliftonr.

Keane’s thought to be in advanced talks with the Black Cats to take the helm at the club following a successful interview with the club’s top brass last week.

And he is now being tipped as the frontrunner to succeed Lee Johnson following his sacking.