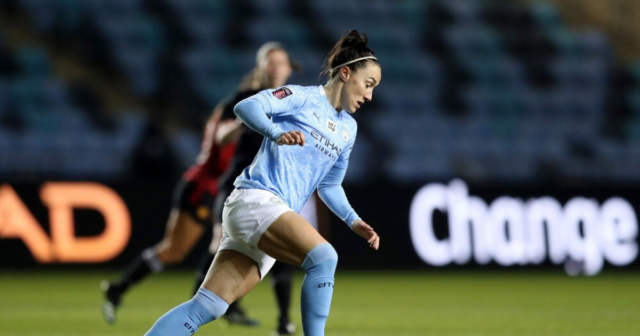 LUCY BRONZE has given a Gareth massive fitness boost with her return to action for Manchester City away against Birmingham.

The England full-back is expected to make her first appearance this term after recovering from a knee op following Team GB’s involvement in the Tokyo Olympics.

Taylor said: “Lucy is available for a period of the game. Having her back is a great option for the team. We’ve missed her.

“She has proven year in, year out what a good player she is and what she brings to a team.

“To not have had her and many of the others already this season has been really tough on the squad.

“I don’t think any of us anticipated how bad the injury crisis was and we were the ones living it. It was tough.”

But Taylor revealed influential skipper Steph Houghton could return to training after the festive period.

The Academy Stadium chief added: “Demi’s struggling with an illness – just a normal illness; not COVID-19 – and seems to be struggling, she is a doubt and Jill had an ankle injury when she returned from England.

“Steph we’re anticipating will be back out on the pitch training with the group after the (Christmas) break.”

Carter’s first game in the Brum dugout comes with the team currently second from bottom in the table and yet to pick up a win this term.

The St Andrew’s outfit have lost six times to City in the WSL which is their worst ever run against a rival side in the division.

However, Carter believes the team, who have picked up just a point from eight games, has enough quality to avoid relegation.

The Birmingham boss said: “We’re not naive enough to think that we’re going to go shooting up the division.

“The aim is to stay up, that’s the remit. If we can finish second from bottom, then we’ve achieved what was set out when I came in.

“I want us to get some momentum and get some confidence.

“We’ve got a talented group so where’s the ceiling? I think it can be quite high.”

Did you miss our previous article…
https://www.sportingexcitement.com/football/premier-league/cristiano-ronaldo-to-start-selling-fake-tan-with-man-utd-superstar-launching-his-own-brand-of-bronzer