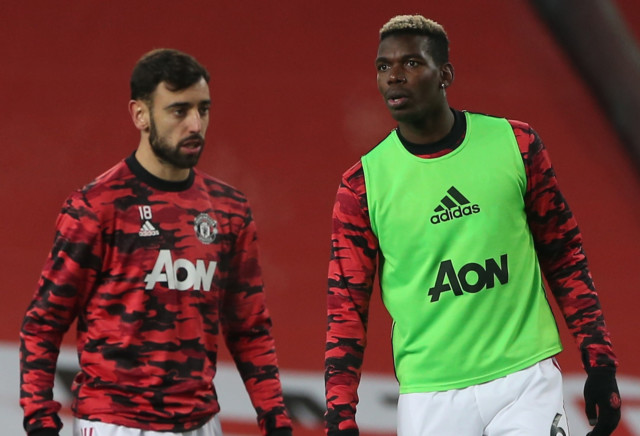 BRUNO FERNANDES praised his ‘top’ midfield partner Paul Pogba — but believes there is much more to come from the French star.

The £89million Manchester United ace looked more like his old self in the 2-1 win over Aston Villa on New Year’s Day.

Fernandes has taken most of the headlines for his performances since he arrived at Old Trafford a year ago this month.

But he feels Pogba has a huge role to play  as United chase glory on four fronts.

The former Juventus man had a hand in the Red Devils’ opener against Villa,  then also won the  penalty which  Fernandes scored to secure the points.

The Portuguese international said: “I think Paul was top on Friday night. We know all the qualities he has.  That is not in doubt.

“We know he can play, we know he can help us and he was involved in both goals. For the first, he shows very good skill.

Boss Ole Gunnar Solskjaer was  also delighted with the display the club’s record signing put in.

When Scott McTominay, Fred and Fernandes all shone in the 6-2 rout of Leeds, Pogba was watching on from the bench.

And with his agent Mino Raiola seemingly keen to move him on, there were yet more doubts about the World Cup winner’s future at the club.

But Solskjaer felt the 27-year-old showed what he can give to the team  against Villa.

He added: “Paul is getting fitter and stronger — and then you get performances like this.

“He took 25 minutes to get going but when he did get going, he made a difference for us.

“I think it’s important we get Paul on the ball, whether it’s low in the pitch or a bit higher between the lines.

“I think that he made the difference higher up. I know he started off defending. But we wanted him to make runs in behind them, to get on the ball.

“His physical presence is important for us because we knew that Aston Villa are one of the strongest sides  in the Premier League.

“We needed to match them. And he won a lot of headers, I was delighted with his performance.”

Fernandes was impressed by the way his team-mates rallied round each other to ensure they moved level on points with Liverpool.

Villa staged a fightback which could easily have brought an equaliser, if not for an Eric Bailly  last-ditch block at the death.

“But I saw it in the stands in the last  minutes, everyone shouting and taking care of the ball.”

Did you miss our previous article…
https://www.sportingexcitement.com/football/premier-league/arsenal-whizkids-willock-nelson-and-nketiah-need-january-loans-to-continue-development-claims-legend-campbell