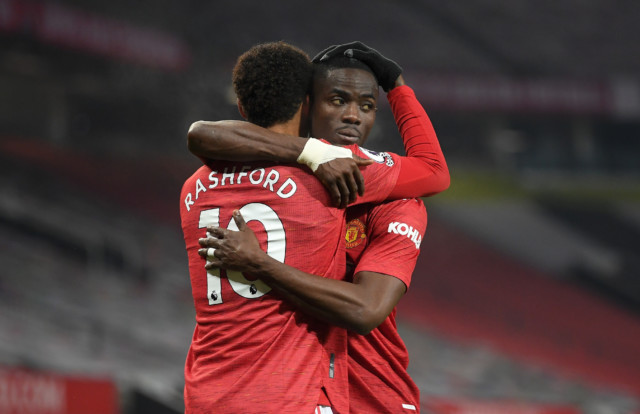 A hard-fought 90 minutes at Old Trafford was capped by Marcus Rashford’s injury-time goal in front of the Stratford End.

The win took United up to second in the Premier League table, two points behind arch rivals Liverpool.

Bailly was in buoyant mood after his seventh appearance of the season and took to Instagram to celebrate.

While Rashford took the plaudits for his match-winning contribution, Fernandes led his United team-mates in hailing Bailly’s display.

Advertisement. Scroll to continue reading.
Bruno Fernandes was quick to hail his team-mate

Scott McTominay expressed his praise through the medium of emojis

The Portuguese, who assisted Rashford’s goal, posted: “My man of the match.”

Juan Mata added: “And mine.”

While Victor Lindelof, who has been ahead of Bailly in the defensive pecking order, posted four bicep emojis.

Bailly’s impressive display is likely to leave Ole Gunnar Solskjaer with a selection dilemma after Lindelof missed the win through injury.

Speaking after the final whistle, Solskajer said: “We had to defend well because, on the counter-attack, Wolves are always so dangerous.

“I thought Eric did fantastically all night, breaking up a few counter-attacks and Nemanja [Matic, in the] second half.

“We just adjusted a couple of positions in the second half to stop their counters and I think it worked.

“David [De Gea] had to make a save and he did. It was a good save, it was an important one for us.”

The Carabao Cup semi-final against Manchester City is in doubt due to a coronavirus outbreak among the Sky Blues.