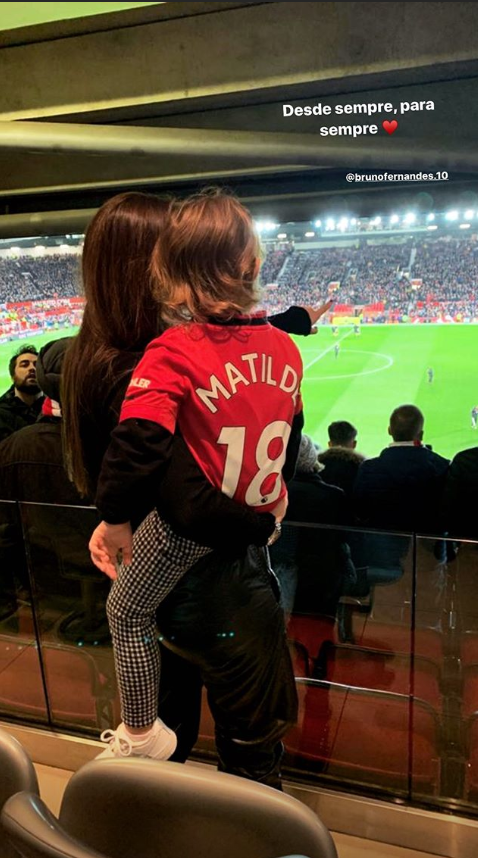 BRUNO FERNANDES’ wife and daughter cheered him on from an Old Trafford box as he made his Manchester United debut against Wolves.

The Portugal midfielder, 25, was named Man of the Match in yesterday’s 0-0 draw after playing the full 90 minutes.

And cheering him on from the stands were his stunning wife Ana Pinho and adorable daughter Matilde, who turned three on Friday.

Childhood sweetheart Ana, 25, shared a cute picture of herself holding Matilde – wearing a No18 United shirt with her name on the back – and pointing towards her dad on the pitch.

A heartwarming video also shows little Matilde sat down and watching in anticipation as her superstar father lines up on the pitch.

Fernandes responded with three love hearts of his own.

Ana and Matilde were also in attendance for his final ever Sporting game against Maritimo on Thursday before his emotional transfer.

The midfielder, who cost United 55million from Sporting Lisbon, first started dating Ana when they were just 16 at high school in Boavista where they were in the same class.

He even chose his No18 shirt in tribute to his other half.

Fernandes said: “There are a lot of reasons for the No18. Its a number I like.

“No18 is also the birthday of my wife and another reason is, when I grew up, I saw Paul Scholes playing in it and for me having this shirt and this number of an amazing player is something I will enjoy. I know I have a lot of responsibility.”

But had it not been for Fernandes’ persistence, the midfielder would have never ended up with Ana.

At the time I was in Boavista and went to a nearby school. We fell into the same class.

He tried a few times [to kiss me] and I always said ‘no’, and then I gave in.

[It was] at school, it was just the two of us, it was in front of the school, there was a gum shop, that’s it.

They married in December 2015 and welcomed baby Matilde into the world in January 2017.