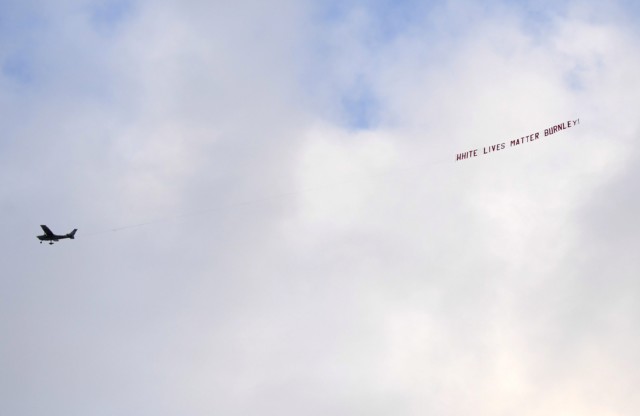 DURING the Second World War, they had anti-aircraft guns to fire at men in planes with similar mentalities to those who disgraced Burnley Football Club last night.

When Premier League players, match officials and club chiefs so firmly embraced the Black Lives Matter movement during football’s lockdown, there was always a concern that there would be a backlash such as this.

A ‘white lives matter banner’ flew over the Etihad

In a perverse way, Burnley’s airborne boneheads have done us a service.

There were plenty who were asking why a wave of protests which flowed into the mainstream by virtue of the death of a black man at the hands of a white policeman in Minnesota had any relevance here.

Well, when a group of pondlife are organised enough to club together and create a banner, to charter and fly a plane around the Etihad before Manchester City’s clash with the Clarets, proclaiming ‘White Lives Matter Burnley’, then everyone should realise that there is a virulent strain of racism in Britain too.

Burnley captain Ben Mee – very much one of the Premier League’s good guys – made a point of speaking out forcefully against the offending banner last night.

And the banner was offensive not because white lives don’t matter. Of course they do and of course there are white lives which are troubled and which are certainly not privileged – in Burnley and many similar working-class towns.

As those at the forefront of Black Lives Matter have frequently proclaimed – ‘this is not black against white, it is everyone against racism’.

English football is a diverse, inclusive and unifying game at pitch level – a fact which has allowed it to take such an authentic stand against racism in the past few days, with players ‘taking a knee’ before each game since the Premier League resumed.

Burnley's Ben Mee responds to an offensive banner flown over the Etihad Stadium before today's game with Man Citypic.twitter.com/FEQqOEb3yu

There has also been – not before time – a genuine recognition that more must be done to ensure BAME people are no longer shut out from jobs in dugouts and boardrooms.

But they also showed us why football’s support for Black Lives Matter is so relevant and important.