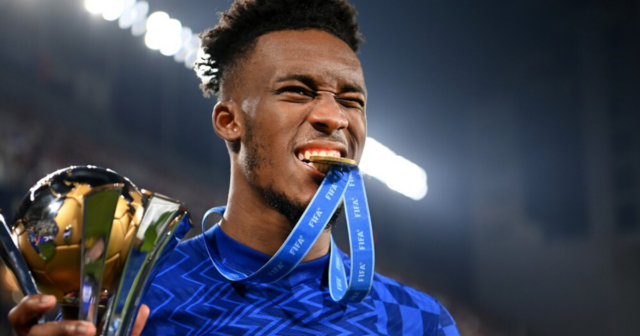 CHELSEA star Callum Hudson-Odoi has revealed his delight that boss Thomas Tuchel BLOCKED his transfer away from the club.

Borussia Dortmund came knocking for the winger on transfer deadline day in September.

Callum Hudson-Odoi is relieved he stayed at Chelsea this season

But Tuchel knocked back the bid and insisted Hudson-Odoi would get more chances in the starting XI.

He had previously been linked with a switch to rival Bundesliga outfit Bayern Munich.

The 21-year-old has been deployed by the German as a winger and at wing-back and is seemingly finally realising his potential at Stamford Bridge.

And speaking after getting his hands on the trophy, Hudson-Odoi expressed his relief that he stayed in West London.

He said: “Big trophies like this are games you want to be involved in with a club like this.

“Big games, big trophies, you want to win as much as possible with a club like this.

“Our aim is always to win games and win as many as possible.

“When we get the opportunity we keep pushing.

“If I went out in the summer I wouldn’t get opportunities to play like this and enjoy the games and win trophies.

“So I’m really delighted that I stayed and obviously I got the opportunity to play.”

Hudson-Odoi has featured 26 times in all competitions for the Blues this season, scoring three goals.

Did you miss our previous article…
https://www.sportingexcitement.com/football/premier-league/liverpool-legend-mark-lawrenson-makes-premier-league-top-four-prediction-with-man-utd-affected-by-dressing-room-issues