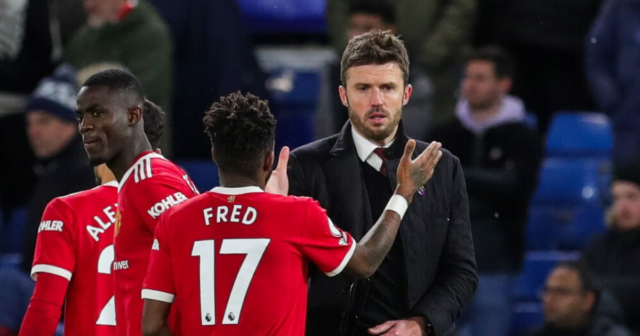 MICHAEL CARRICK has leapt to the defence of Fred.

The Brazilian international has been a target of criticism this season as Ole Gunnar Solskjaer stuck with him while the season went into reverse.

There was even sarcastic cheers when the midfielder was hauled off in the 2-0 mauling by Manchester City for the inclusion of Donny van de Beek.

But caretaker boss Carrick has stuck with the 28-year-old, allowing him a role further forward in the team which helped in him creating Cristiano Ronaldo’s crucial goal in the 2-0 win over Villarreal.

He was also part of a stoic performance in the 1-1 draw at league leaders Chelsea and even had a late chance to score a winner.

Carrick said: “He is first choice for Brazil in a good Brazil team and that shows how far he’s come since he came to the club.

“I really like him. One of the biggest things is his attitude and desire to be a key player, he is desperate to put himself out there.”

That desire was evident in the Villarreal victory when after twisting his ankle in the first-half he insisted on playing through the pain barrier in the second.

It was his alertness and high pressing that forced the mistake which lead to Ronaldo’s chipped finish.

Carrick said: “He twisted his ankle in the first half and you’ve seen a lot of players come off.

“His ankle was stiff and slightly swollen.

“He carried on then bounced into the game and there was no way he was going to miss the next game and nearly scored late on.

“That mentality is infectious, I think he’s improved an awful lot, Fred.

“He’s played a little higher up the pitch than just before because we tweaked a couple of things and he’s done ever so well, and especially with Cristiano’s goal against Villarreal epitomises that.”

Tomorrow’s match at home to Arsenal will be Carrick’s third and last game in charge with new boss Ralf Rangnick likely to take the reins for the visit of Crystal Palace on Sunday.

He is due to be in the Old Trafford directors’ box watching on tomorrow as the club untangle red tape to get his work visa.

Carrick is yet to speak to him.

He said: “Because of the process and work permit we haven’t been able to. We’ve carried on, it’s worked well the last two games and hopefully will tomorrow.”

Carrick has adapted well in steadying the ship over the last 12 days and admits he has enjoyed the responsibility.

He said: “A lot has happened and I’ve certainly had to adapt and take on a new challenge and different kind of skill set.

“I’ve kind of enjoyed seeing how I’ve come through that.

“But being pretty close and seeing what’s going on in recent years, it’s not been as much of a step up as people think.

“It’s something where you’ve got to learn on the job but for the most part, I’ve enjoyed it.”