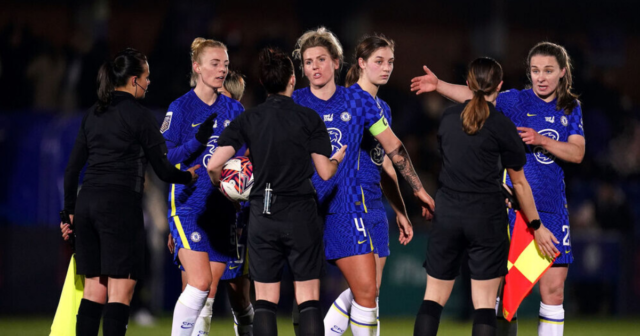 EMMA HAYES questioned the decision that led to Chelsea missing out on a penalty chance in the dying moments of their draw with Arsenal.

It was honours even as the WSL’s title-rivals battled their way to a frenetic 0-0 finish in front of a sell-out Kingsmeadow crowd.

But there was a moment of drama with Chelsea’s late appeals for a pen after the ball struck Leah Williamson’s arm towards the game’s closing stages.

Hayes said: “Arsenal’s best moments in terms of dominance were in the first half. We created some big chances which weren’t to be in the second half.

“The talking point will be a penalty that wasn’t given though. From our perspective it was a clear penalty.

“The whole stadium felt it was, even the Arsenal bench probably did.

“The referee (Rebecca Welch) looked at Leah Williamson and asked did you handball it? Of course, she said she didn’t. We missed a big decision.”

Hayes added: “It (the game) was a great advert for the league in terms of watching two teams in great form.

“I thought the accumulation of games showed in us tonight. I didn’t think we were free flowing by our standards going forward.

“We were rock-solid defensively. The game was too tight to call”

The hosts started strongly dominating possession with the Gunners content to counter.

Fran Kirby saw a mishit shot fly over the bar in the third minute before Arsenal began to gather momentum.

The visitors, hoping to open up a five-point lead at the top of the table, enjoyed the better attacking chances in the first spell.

One of their earliest came with Noelle Maritz’s probing cross forcing Ann-Katrin Berger to punch the ball out of danger in the ninth-minute.

And Caitlin Foord looked for a penalty almost ten minutes later after nutmegging Jess Carter and hitting the turf after a collision with the defender.

A little later Miedema came close to an opener clattering the bar with a right-footed volley.

And her side looked to cause more problems for the champs’ defence.

A misplaced pass from Aniek Nouwen eventually led to a Mead cross that was dropped and quickly reclaimed by Berger in the 35th minute.

At the other end, Sam Kerr forced a fine block from Steph Catley following Harder’s lofted pass near half-time.

The second spell saw Chelsea eager to take the game by the scruff of the neck.

Cuthbert saw a shot blocked in the 49th minute before Jonna Andersson rifled an effort narrowly wide of the post.

Kerr had a glorious chance to shoot in front of goal but failed to connect with Rafaelle blocking a follow-up shot from Kirby.

And there was a moment of frantic defending for the league leaders in the 60th minute with Zinsberger spilling the ball after Ji So-yun’s shot.

The champs were forced to do some last-ditch defending of their own in the 87th minute.

Frida Maanum forced a desperate save from Berger before Millie Bright’s clearance off the line in her 200th Blues appearance.

And there were appeals for a handball after Niamh Charles’s cross struck Leah Williamson’s arm in injury time.

But ref Rebecca Welch was having none of it with the game ending in a point each for the title rivals.

The result saw the two-point gap remain between the Blues and the league leaders with the champs still a game in hand ahead of the international break. 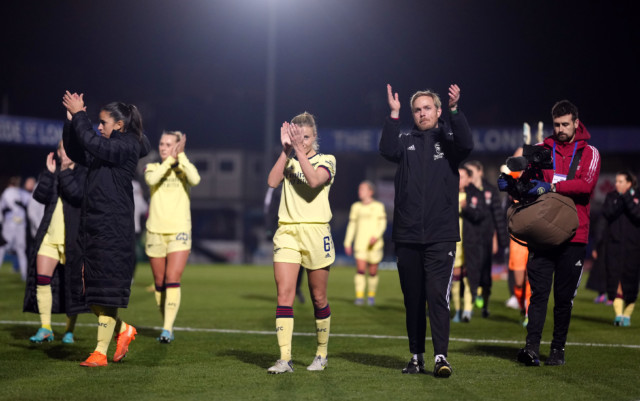 Reflecting on the result Jonas Eidevall said: “Because of really good defensive play neither team got the win but both teams had good chances.

“Football and the WSL are the winners of games like this.

“If more games are like this then we will be the best league in the world.”

Did you miss our previous article…
https://www.sportingexcitement.com/football/premier-league/cristiano-ronaldo-could-quit-man-utd-this-summer-but-old-trafford-icon-37-tells-pals-its-not-all-the-clubs-fault

Advertisement. Scroll to continue reading.
In this article:arsenal, chelsea, Reading