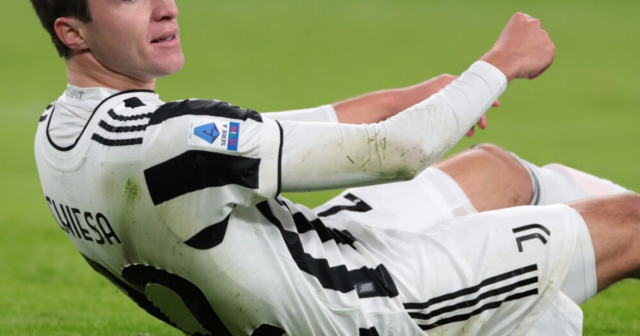 FEDERICO CHIESA is being monitored by Chelsea and Bayern Munich, according to reports.

The Italian star is one of Juventus’ biggest assets, following the sale of Cristiano Ronaldo last summer.

Federico Chiesa is in demand

Chelsea have been linked with making a huge £84million swoop for the attacking midfielder.

But Juve are reluctant to sell.

Should they fail to qualify for next season’s Champions League, however, Chelsea and Bayern are set to test their resolve – according to Italian reporter Nico Schira.

Chiesa, 24, is understood to be happy in Turin.

But his commitment could be tested should his side not make the top four.

He sent Chelsea fans wild last week as it emerged he follows their official account on Instagram.

Juventus, who were beaten 4-0 by Chelsea last week, have struggled this season.

Returning boss Massimiliano Allegri has been unable to inspire his men, as they currently sit seventh in Serie A.

After six wins, three draws and five defeats the Old Lady already find themselves seven points off the top four after just 14 games.

And their misery has been compounded further, by the news that Chiesa will reportedly miss the rest of 2021 with a thigh injury.

In matters off the pitch, the Italian giants have been accused of false accounting, with their offices having been raided by cops last week.

And Italian consumer rights watchdog Codacons claim that they could even be RELEGATED if found guilty.