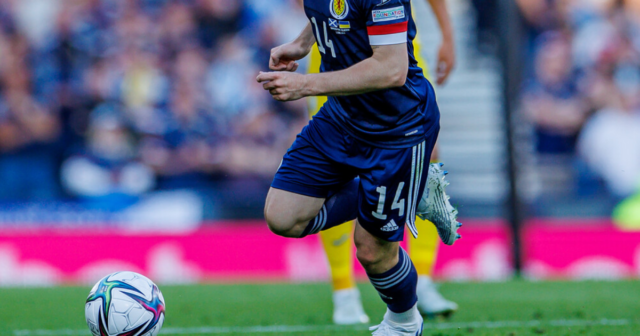 SCOTLAND hero Billy Gilmour has been getting ready for his Chelsea pre-season – by training with a Scottish junior outfit.

The 21-year-old Ayrshireman is back at the family home in Ardrossan for the summer and he’s keeping himself in trim by attending training with Glenafton.

The West of Scotland Premier League side shared an image on their social channels of Gilmour clad in a Glenafton top with manager Ryan Stevenson, himself a former Chelsea youngster.

Gilmour, who spent last season at Norwich, has been linked with a loan move to Everton from Chelsea this season.

He has been spotted at Loch Park in the past cheering on old pals – while his younger brother Harvey has signed his first pro deal with Kilmarnock.

“This session was geared towards raising the fitness levels of the players for the upcoming season, and we hope the fitness work will be of great assistance to our players and Billy before he returns shortly to Chelsea to start their pre-season preparations.

“Billy is a regular at our games whenever he is back in Scotland and everyone at the club would like to wish Billy all the best for the upcoming season with Chelsea.”

Gilmour has been periodically linked with a loan move to his old club Rangers – but former Chelsea star Pat Nevin believes he would be perfect for rivals Celtic.

Former Blues winger Pat Nevin believes the 21-year-old is almost the finished article as a player but must avoid going on loan to a team battling relegation, like Norwich were during the last campaign.

It’s well-known that Gilmour’s mum in particular is a huge Gers fan and she cheekily refused to touch the green part of the Norwich scarf when he signed for them last year.

Speaking to BoyleSports, exclusively for the Scottish Sun, Nevin said: “I know Billy a bit and his family and yeah Rangers would suit his style and so would Celtic.

More from The Scottish Sun

I work in M&S – folk love yellow sticker buys, but here’s why they’re a pain

“Knowing his family though, the Celtic one is unlikely.

“He’s different class Billy, he’s a super player. But he needs to be playing for a team who plays good football which is suited to him. I think Celtic and Rangers style would work for him, but because of his family, it wouldn’t be Celtic for him.”

Advertisement. Scroll to continue reading.
In this article:familyhome, gettingready, hasbeen