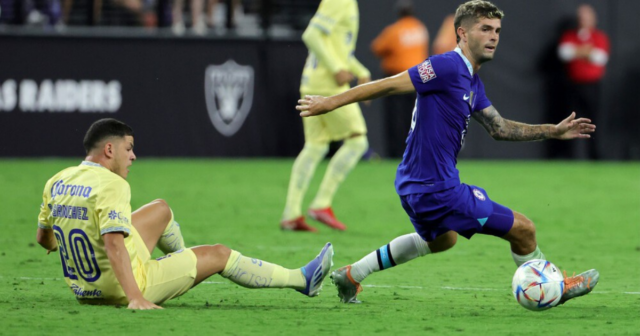 The Blues are currently touring America in pre-season, which comes after several mass shootings have taken place in the country this month alone.

Pulisic, 23, was one of the US Men’s National team players who signed a letter calling on Congress to pass gun control legislation last month after shootings in Buffalo and Uvalde.

He said at the time: “I hope you guys can all realise why we did it. People can say: ‘It’s not the guns, it’s the people,’ but we have to start somewhere.

“The letter was where we wanted to start.”

And during a Zoom press conference previewing Chelsea’s clash with Charlotte tomorrow evening, Pulisic was asked again for comment on a major and current issue in the U.S.

But a club press officer interjected to inform the call that the player would not be answering that line of questioning.

US sports people have been very vocal in the media this year regarding their views on a gun control situation that seems to be spiralling out of control in their own country.

Last month, American tennis star Coco Gauff used her platform to urge for gun reform having reached the final of the French Open.

The 18-year-old signed a camera with the words: ‘Peace End Gun Violence’, and then said: “I think that this is a problem in other parts of the world, but especially in America.

“It’s a problem that’s, frankly, been happening over some years, but obviously now it’s getting more attention.

“Hopefully, it gets into the heads of people in office to hopefully change things.”

On this occasion however, it is understood that neither Pulisic nor Chelsea believed it to be the appropriate time to comment on the subject again.

They did not want to risk entering a US political debate while on tour with the club.

Regarding his own future, with two years still to run on his current contract at Stamford Bridge, Pulisic also added he had not spoken to new US owner Todd Boehly and was focused on starting the new season under boss Thomas Tuchel.