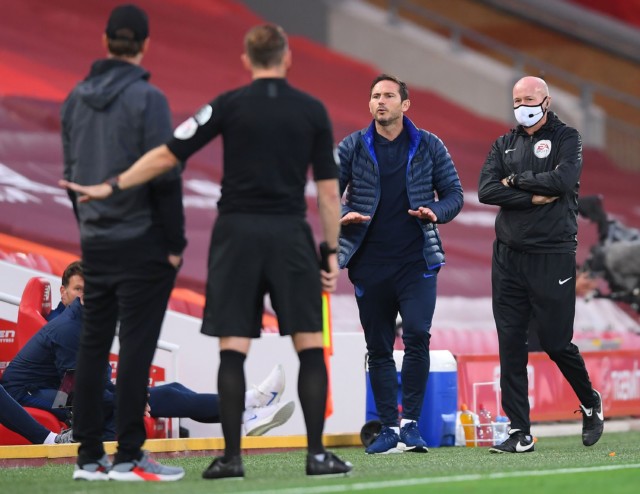 CHELSEA boss Frank Lampard has admitted that he still hasn’t had a drink with Jurgen Klopp following their infamous touchline row.

Blues chief Lamps and his Liverpool counterpart were involved in a heated exchange during a Premier League clash at Anfield last July.

The ex-England midfielder, 42, lost his cool with Klopp and his assistant Pep Lijnders after the referee awarded the Reds a free-kick which led to their second goal in the 5-3 thriller.

Lampard repeatedly swore at Klopp and his backroom staff, at one point telling the German to ‘f*** off’ and ‘sit down‘.

And the Chelsea legend was still fuming after the final whistle, branding Liverpool ‘arrogant’ in his post-match press conference.

Lampard has since admitted he regretted the bust-up and confirmed there was no bad blood between the pair.

Both managers have since faced off again with Chelsea’s 2-0 defeat to Liverpool at Stamford Bridge in September.

But appearing on the new Harry Redknapp Show, Lampard revealed he never had the chance to have a drink with Klopp after the game.

He said: “These days there’s so much to do after a match – press conferences, television.

“By the time you’ve finished, the other manager’s on a plane on the way home.

“Some of the old school managers still make time for a glass of wine after the match. I always like it. It’s nice having a normal chat.

“I never managed a drink with Klopp though.”

And the former Tottenham and West Ham gaffer conceded once typical customs have long since changed in the modern game.

He added: “Back in the day, you had very little to do after the match – you’d be in your office after the match and the opposition manager would come in and you’d share a bottle red.

“Then, you’d get back on the coach and have fish and chips on the way home.”

Did you miss our previous article…
https://www.sportingexcitement.com/football/premier-league/man-utd-outcast-jesse-lingard-wanted-by-inter-milan-in-loan-deal-to-join-romelu-lukaku-and-ashley-young-at-serie-a-side