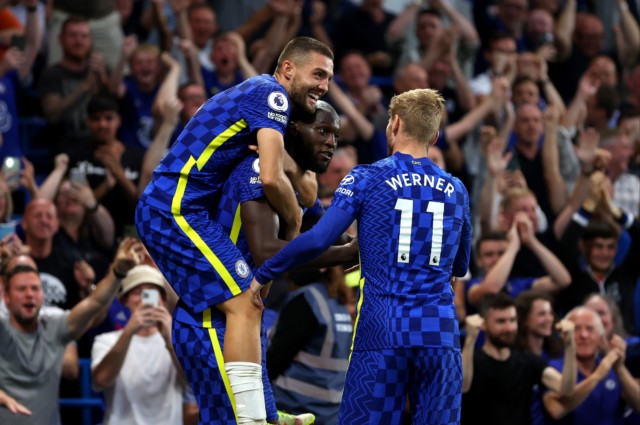 The Chelsea boss is weighing up a start for the German alongside the prolific Lukaku for the Carabao Cup visit of Aston Villa.

Timo Werner and Romelu Lukaku could start for Chelsea on Tuesday

Werner has struggled for goals since moving to Stamford Bridge last summer while recent £97.5million recruit Lukaku has hit the ground running with three league goals already this season.

But Tuchel has tipped the 25-year-old Werner to build on the partnership he forged with his Blues team-mate when coming on as a sub against Tottenham on Sunday.

Tuchel said: “He gave us a clear impression of how dangerous he and Romelu can be together.

“There was some disappointment from the Euros and the first games, I don’t think he was happy with his performances.

“The stuff that you don’t see, in training sessions, he’s more relaxed, more fluid in his movements, with more confidence.

“That’s why he came on early against Tottenham, there are clear signs he is in a good way and he can prove it tomorrow.”

Tuchel introduced Werner with 20 minutes left as Chelsea swept to a 3-0 win away to Spurs.

And his decision was rewarded as the forward turned provider, setting up fellow Germany international Antonio Rudiger for the visitors’ third.

The manager hailed the performance and said it gave him plenty of reason to believe he could start Tuesday’s Carabao Cup clash with two strikers leading the line.

Tuchel added: “Timo was in better positions and we had him in dangerous positions around Romelu.

“And he got an assist. He moves smart, he’s free and his decision making is with more confidence.

“Hopefully he can push himself and keep that momentum going.”

How Chelsea could line up against Aston Villa