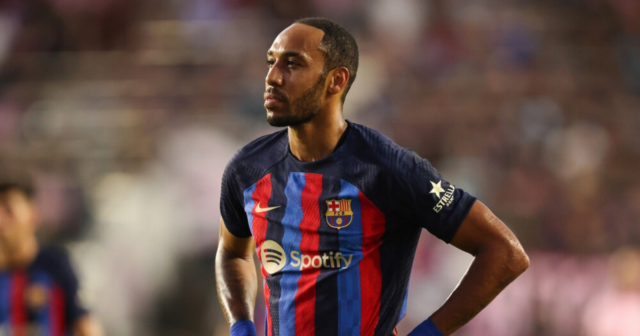 Chelsea start their season against Everton in Saturday’s late kick-off, and have seen a number of new stars come through the door at Stamford Bridge.

Pierre-Emerick Aubameyang is wanted by Chelsea

But these are still not enough for Tuchel, who has reportedly described his squad as average.

According to Florian Plettenberg, the German coach wants to add Aubameyang to his squad next, having previously worked with him while at Borussia Dortmund.

However, Barcelona want to keep the former Arsenal man as a top back up to Lewandowski, with them preferring Memphis Depay to leave instead.

Aubameyang joined the club on a free transfer in January, scoring 13 times in 23 games.

The club are also after Leicester’s Wesley Fofana and have now entered the race to sign Manchester United target Frenkie de Jong.

Although whether these players are among those who Tuchel refers to as world class remains to be seen.

In terms of outgoings, Marcos Alonso appears set to leave for Barcelona after he said goodbye to his team-mates.

They managed to retain captain Cesar Azpilicueta after he penned a new two-year contract.