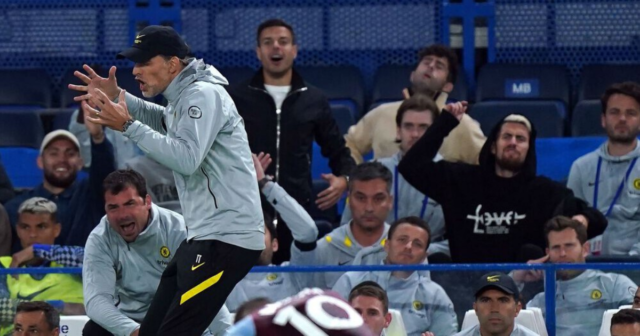 THREE Chelsea stars reacted passionately to a referee decision going against them on Wednesday evening… and fans loved it.

Jorginho, Cesar Azpilicueta and Mateo Kovacic were furious as the referee gave a foul to Aston Villa in the Blues’ League Cup win.

In an image shared on social media by SunSport columnist Simon Phillips, the three players are seen reacting to a decision by ref Graham Scott.

Jorginho, Azpilicueta and Kovacic were all rested for the game as Chelsea went on to beat Villa in a penalty shootout at Stamford Bridge.

And fans were loving the trio’s enthusiasm, with one tweeting: “They look like the lads in the Shed End.”

While another wrote: “What part of ‘take the day off’ do these guys not understand? They just can’t relax for one match. Love that.”

Midfielder Ruben Loftus-Cheek also got the nod and took his chance, putting in a superb display against the West Midlands club.

And Malang Sarr finally made his debut – a YEAR after signing for Chelsea.

Speaking to the club’s website after the match, Tuchel said: “We had many changes, the team had never played in this formation.

“This needs a bit of time on the field, but it was important we don’t expect too much in terms of how we create chances.

“We expected energy and teamwork, and this is what we got out of it. With every minute we got more confident.”