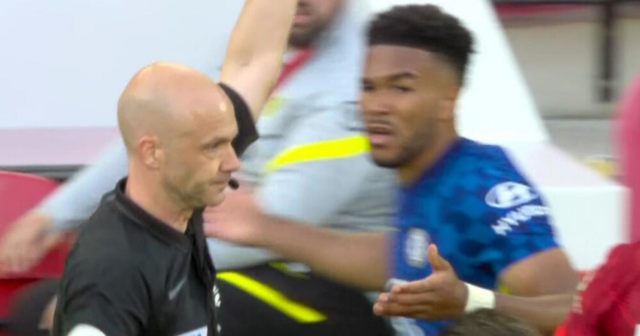 CHELSEA have been hit with a £25,000 fine by the Football Association for failing to control their players during the draw at LIverpool.

Defender Reece James was sent-off by referee Anthony Taylor after a goalline handball.

That led to Mo Salah equalising from the penalty spot.

Chelsea’s players incensed by the official’s decision to dismiss England international James as they felt it had deflected off his thigh onto his arm.

And that led to some furious protests following the VAR check.

Now they have been deemed to have been too much as the governing body took action against Thomas Tuchel’s men.

An FA statement confirmed: “Chelsea FC has been fined £25,000 for two breaches of FA Rule E20.1 which occurred during their Premier League fixture against Liverpool FC on Saturday 28 August 2021.

“The club admitted failing to ensure that its players conducted themselves in an orderly fashion during both the 48th minute of the first half and following the half-time whistle.”

The Blues had taken the lead at Anfield in the crunch clash early doors.

Kai Havertz’s headed goal put them ahead after just 22 minutes.

However, Jurgen Klopp’s side then levelled from the penalty awarded courtesy of Salah in first half additional time.

The Reds pushed for a winner with their man advantage during the second period but Chelsea held firm to secure a point.

That left both sides unbeaten three matches into the new Premier League campaign.

Did you miss our previous article…
https://www.sportingexcitement.com/football/premier-league/cristiano-ronaldo-chased-by-adoring-man-utd-fans-as-he-leaves-training-session-in-160000-lamborghini