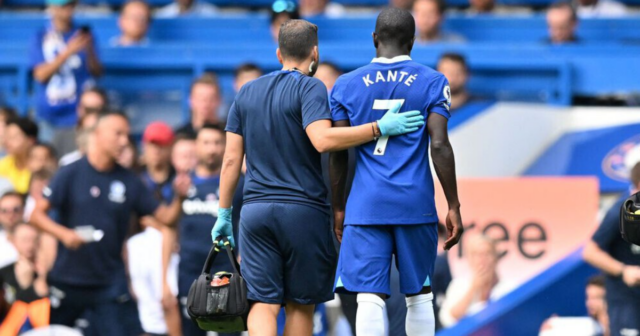 CHELSEA have suffered an early season blow with N’Golo Kante facing an injury lay off.

The French international hobbled off with a hamstring problem in Sunday’s dramatic 2-2 draw with Tottenham.

Blues boss Thomas Tuchel gave a grim verdict on Kante, 31, when speaking to Chelsea’s official site after the game.

The German said: “It seems like a muscle injury, a hamstring.

“He [Kante] said he feels it pretty strong, so not good.”

The midfielder had rolled back the years with an sensational display before going off.

His performance was epitomised by his role in Chelsea‘s second goal.

The Frenchman won the ball in Tottenham’s half before finding Raheem Sterling, with the England ace teeing up Reece James to score.

The Blues crumbled without him in stoppage time as they conceded a late equaliser from a Harry Kane header.

It is unknown how long Kante is out for but the Blues will have time to dip into the transfer market for another midfielder.

Owner Todd Boehly may have to put his hand in his pocket to renew interest in Barcelona’s Frenkie de Jong.

It was a dramatic affair in West London as Tuchel and Spurs boss Antonio Conte SQUARED up to one another.

Security had to step in to hold back the two heated managers and their respective benches.

The opposing gaffers then sparked another explosive row as they were both SENT OFF after the final whistle.

As the pair shook hands, they shared another exchange of words.