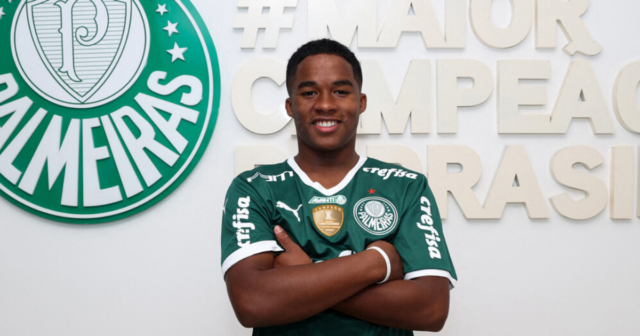 The Palmeiras ace, 16, is yet to make his Copa Libertadores but is already eyeing a move to Europe.

Chelsea’s proposal to Endrick has been well received

And according to Diario AS, Chelsea have joined the race to sign Endrick.

The Blues will have to rival Barca as well as Real for Endrick‘s signature.

Real, in particular, have done well in the Brazilian market in recent years, signing the likes of Vinicius Jr and Rodrygo.

But the report states that Chelsea’s proposal for the player has been well received.

Both Endrick and his family are happy with the proposal from the Premier League side.

However, should Chelsea win the race for Endrick, they would have to loan the player out until he turns 18 due to Brexit regulations.

Endrick is a big fan of Vinicius Jr and was even sent a shirt from the Real and Brazil ace.

Speaking to Marca earlier this year, he said: “He [Vinicius] was in spectacular form and he sent me this shirt.

“I support him a lot, also Real Madrid to win another Champions League. I thank him, I’m waiting for him here at Palmeiras.

“I have to send him a signed Palmeiras shirt.”

Endrick has also admitted that his love for Real comes from watching Cristiano Ronaldo during his time at the Bernabeu.

He continued: “They are a club I’m very fond of because of Cristiano Ronaldo, who I always followed, with the four Champions League trophies he won there.

“I have a lot of love for Real Madrid because of Cristiano, although I have also looked up some of their history and they are a very good team.

“It is very gratifying for me to know that they are watching me and seeing my games.

“I am very grateful to God for that. I have to do more, it’s not good enough yet, I have to give more. I still have a way to go.”