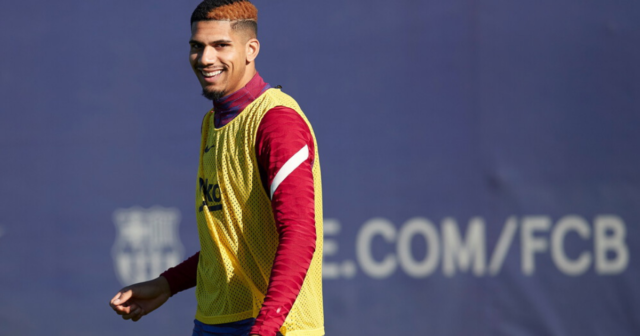 CHELSEA have reportedly joined Manchester United and Liverpool in the chase for Barcelona’s Ronald Araujo.

We reported last week how fears are rising within the Nou Camp club that the two North West Premier League rivals could snatch their highly-rated prospect.

Now Sport have thrown Chelsea’s name into the mix of sides interested in signing Araujo.

And they state the South American is ‘extremely grateful’ to Barcelona but is open to a lucrative move to England.

The 22-year-old star arrived at the Nou Camp from Uruguayan side River Boston in 2018.

The defender has since broken into the first-team squad and the Uruguay national side.

He is out of contract in 2023 but Barcelona want to reward his progress with a new five-year deal.

The centre-back’s wage demands could ‘complicate’ negotiations with claims ‘there is a concern at Barcelona that they may not be able to meet the terms that he is requesting’ to stay.

Both Manchester United and Liverpool have been monitoring the starlet’s development closely over recent years.

And with the financial difficulties facing Barcelona, they know that the Red Devils and Anfield club possess the ‘financial might’ to push forward with their interest and launch a raid for the South American.

Last week it was also reported that Liverpool are ‘particularly keen’ on Araujo and have had their scouts watching him over the course of 2021.

Chelsea have Thiago Silva, Andreas Christensen and Antonio Rudiger all out of contract at the end of the campaign and are looking for replacements.

But Barcelona did recently secure the long-term futures of young stars Pedri and Ansu Fati and getting Araujo to commit his future is a major priority.

They are desperate to avoid a similar situation to the one they faced with Ilaix Moriba last summer.

They were forced to cash in and sell to RB Leipzig after he refused an extension after entering the final year of his contract.