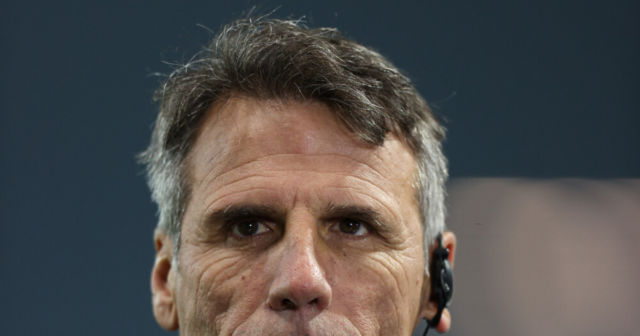 IT IS not often that a conversation with Gianfranco Zola brings Meat Loaf to mind.

But that truly awful song  — even by the standards of dreary rock ballads — Two Out of Three Ain’t Bad, is what Zola  thinks  Thomas  Tuchel should aim for from his defensive dilemma.

Chelsea legend Gianfranco Zola fears one of Antonio Rudiger, Cesar Azpilicueta or Andreas Christensen will leave the Blues this summer

Loyal club captain Cesar Azpilicueta, aggressive campaigner Antonio Rudiger and silky Andreas Christensen are free to talk to rivals and could walk away come May, ripping the heart out of Tuchel’s back line.

Chelsea’s German manager has to juggle finances, emotion and the harsh world of professional football to pick a way out of the problem.

If Tuchel and the people above him do not move fast, Chelsea will be forced into a major reshuffle at the back with the squad on the cusp of something special.

Former Chelsea striker and assistant boss Zola admits finding a solution is one of the toughest challenges Tuchel will face in his time as head coach.

The man voted Chelsea’s best ever player by the fans said: “It’s a particular situation because they are three players from the same position.

“We are talking about two of them being key players and have been very successful at the club. Right now, they are  playing all the time — that is Rudiger and Azpilicueta.

“The third one hasn’t played as much but is the youngest.

“You don’t want to lose players when they have been so good like Azpilicueta and Rudiger.

“At the same time you don’t want to lose a good prospect like Christensen.

“I think we will see two stay — but don’t ask me the names.

“Luckily, I am not Tuchel and it is very easy for me not to answer the question.

“I would maybe keep the young one and one other.

“It is not very respectful and I don’t want to sound disrespectful because they have given the club so much.”

Azpilicueta and Rudiger are both out of contract this summer

Azpilicueta has won every cup and title in the book with the Blues and remains a supreme athlete at the age of 32.

Rudiger, 28, is the defence’s pumping heart with the simmering temper that puts opposition strikers in his pocket.

And at 25, Christensen is a Chelsea kid through and through, with the club in his soul and a deft touch to complement Rudiger’s fire.

Real Madrid, Bayern Munich, Borussia Dortmund and Barcelona have eyes on all three.

Stamford Bridge legend Zola, 55, added: “We are talking about a top-level team.

“But the players from the top level of the Premier League can be good anywhere.

“After my first year at Chelsea I was offered the chance to go to another club.

“But it was ‘thanks but no thanks’. I had the feeling I was in the right place, even though I could have earned more money by leaving.

“We have to be honest — money is an important factor.

“As a footballer it is like you run a company and you have to think to do the best for your company — your family.

“In normal business if you are offered a better job with more money, 90 per cent you will go.

“For me, money was not the main thing but that is only me.”