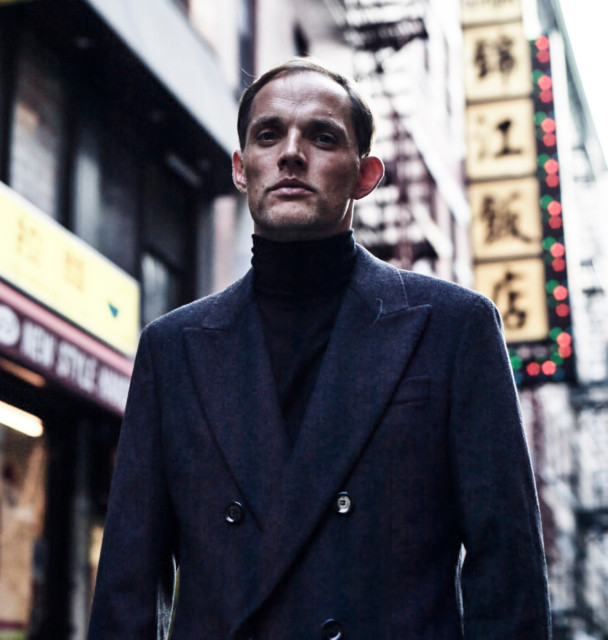 THOMAS TUCHEL is a man of many monikers, but you would never have imagined the former PSG boss would fancy himself as Germany’s next top model.

The Chelsea target, who is waiting in the wings for the Blues job should Roman Abramovich relieve Frank Lampard of his duties, once posed for a fashion shoot in New York for Die Zeit’s men’s magazine.

Thomas Tuchel is a football manager and a fashionista 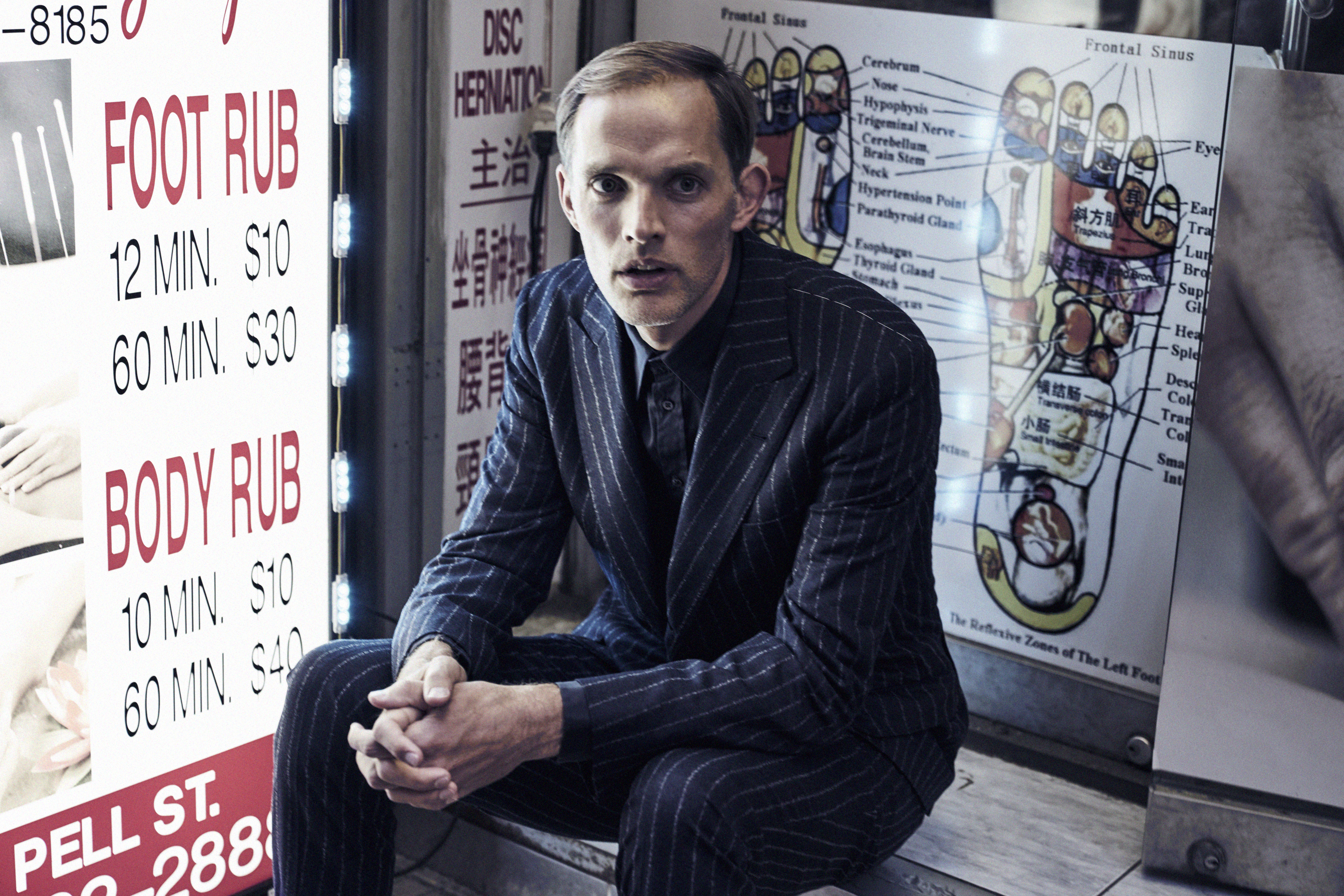 In 2017, Tuchel appeared in ZEITmagazin MANN in a trendy fashion shoot

Tuchel, 47, had a stint as a barman, when he was forced to retire from the game aged just 24 – that he admits helped him become a more confident person.

The German tactician is also one of a rare breed of football managers who hold a degree – he juggled his job at Radio Bar in Stuttgart alongside studying Business Administration at university.

The differing facades of Tuchel paint not just an interesting personality, but one that’s bound to light up the Premier League if he comes to our shores.

In 2017, few could believe what they were seeing – certainly not German football fans anyway.

Skinny Tuchel, who stands at 6ft 2in, was seen in trendy snaps for ZEITmagazin MANN pulling off his best David Gandy impression.

And in fairness to Tuchel, he looked the part wearing stylish clobber while gazing into the distance – and still managing to look his usual pensive self.

At the time, he was in between jobs after he was fired by Borussia Dortmund – just days after they won the German cup.

However, the stylish shoot was clearly the perfect audition for the PSG job he got in 2018, with Paris being the home of fashion.

Tuchel had come a long way from his beginnings as a football manager wannabe. 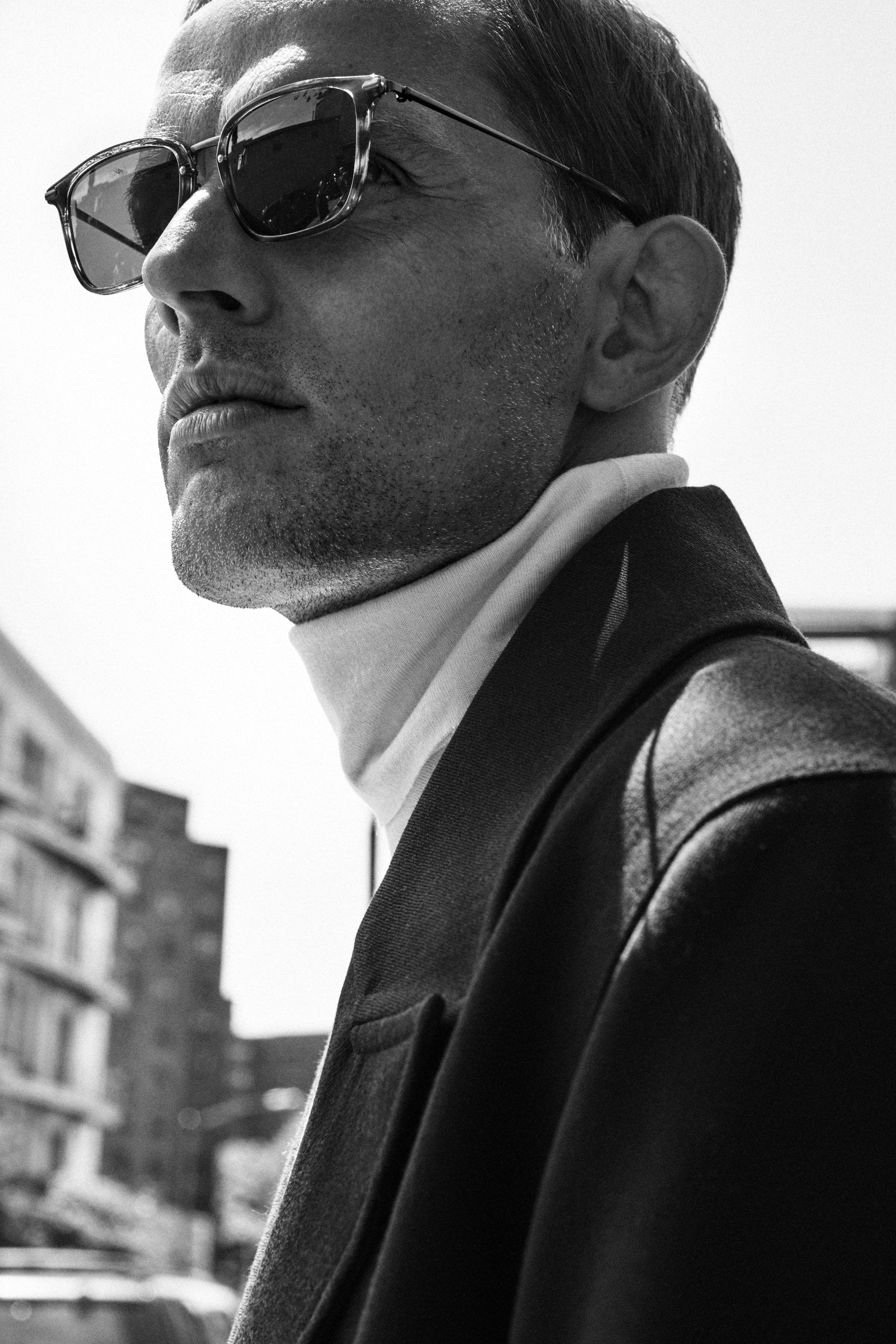 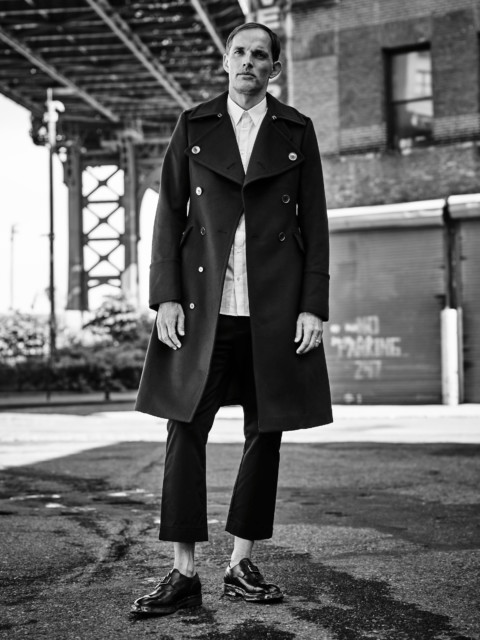 Standing at 6ft 2in, Tuchel pulls off a range of catwalk looks

In his early years, Tuchel rose through the ranks at Augsburg as a defender.

But at 19 he was released, and he moved to second division Stuttgarter Kickers, playing eight times for the club.

Then, with his career in football stalling, he joined third tier SSV Ulm – where he was forced to hang up his boots aged 24, after suffering a serious knee injury.

Instead of dwelling on his failed ambitions, Tuchel enrolled himself onto a Business Administration course.

He supplemented his income working at a trendy bar in the city called Radio Bar. There, he learned life skills – even if his cocktails weren’t up to scratch.

“I don’t want to have drunk the cocktails that I mixed at the beginning,” he laughed in his chat with ZEITmagazin MANN.

“I slowly developed a new self-confidence in the bar, shift by shift, evening after evening.

“I had overcome the inhibition threshold of asking strangers if they needed me. And suddenly I made the experience: ‘Your colleagues just like you for who you are, they have no idea that you were once a professional footballer’” 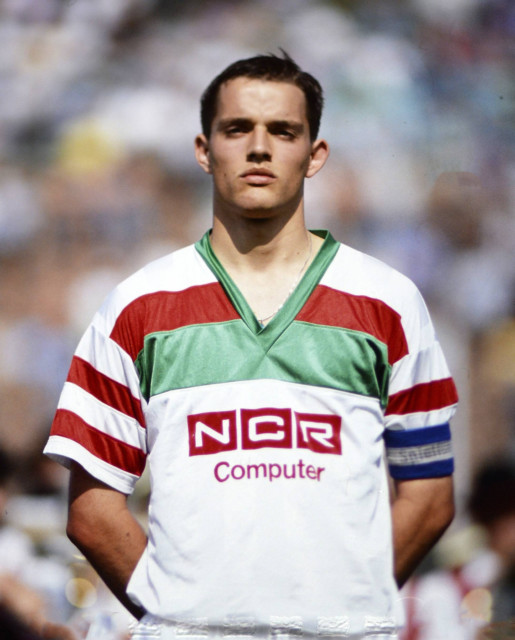 Tuchel began his football career at Augsburg, but was released at 19 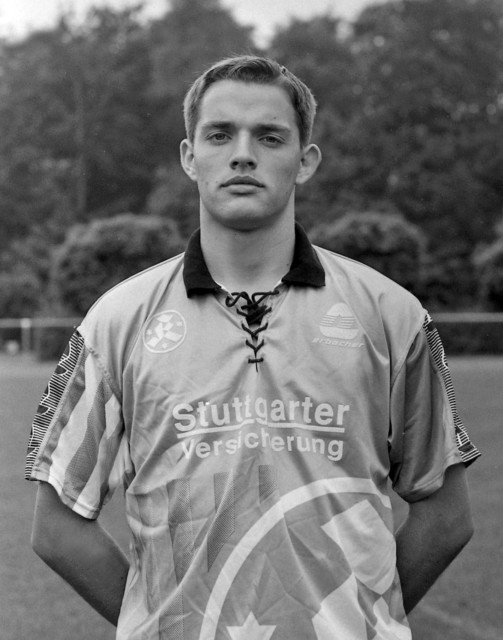 A defender by trade, Tuchel moved to Stuttgarter Kickers 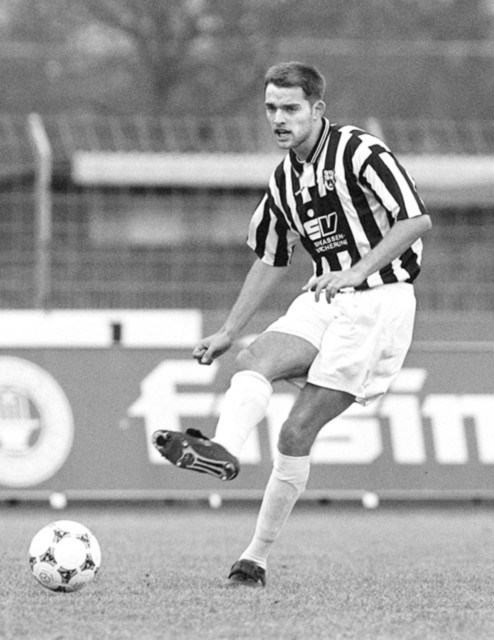 However, at the age of 24 he was forced to retire while playing for SSV Ulm

BACK TO THE DREAM

Despite Tuchel’s best efforts of launching himself into academia and being a customer-pleaser in a bar, he still felt he had unfinished business with football.

He contacted then-Stuttgart boss Ralf Rangnick, who was most recently head of sport and development at Red Bull GmbH, for a trial with the club’s reserves – believing he was fit to play after nine months without kicking a ball.

Seeing a man with a football brain, Rangnick pushed Tuchel towards coaching – he shadowed coaches in the club academy until he took over the U14 team in 2000.

Tuchel now felt he had found his calling. 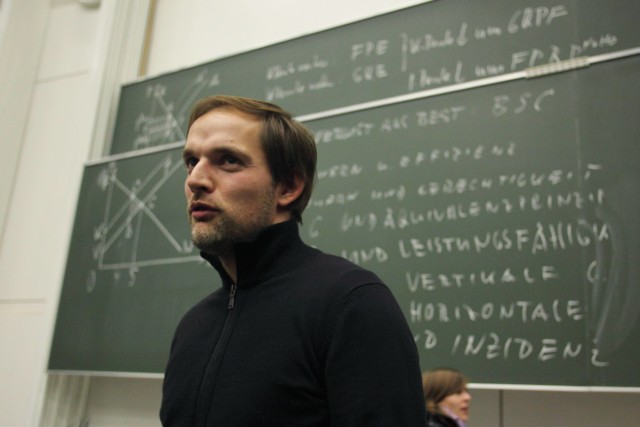 Tuchel isn’t your average manager and boasts a business degree 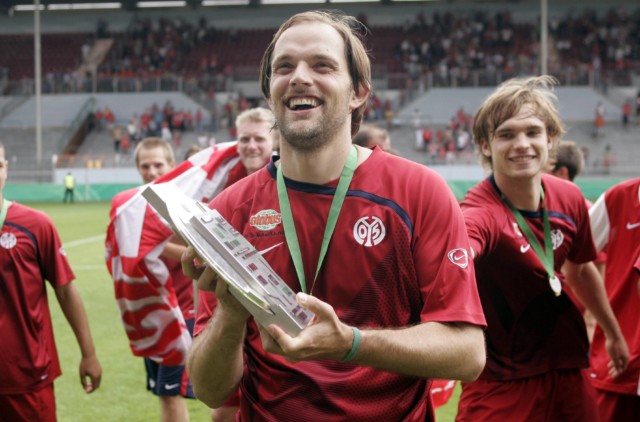 As a youth team coach Tuchel enjoyed much success, including winning the U19 Bundesliga title with Mainz in 2009

FROM BARMAN TO MAINZ HEAD COACH IN NINE YEARS

The steep trajectory that took Tuchel from barman to a Bundesliga head coach in just nine years is testament to his drive to succeed.

At Stuttgart, under mentor Hermann Badstuber, he eventually became assistant coach for the U19s – helping the side win the U19 Bundesliga title in 2005.

In 2006, he returned to Augsburg as head coach, where he completed his coaching badges and became reserve team manager.

Ambitious Tuchel was on the move again – this time to Mainz in 2008, who he led to the U19 Bundesliga title the following year with a team that included World Cup winner Andre Schurrle.

The German national team were desperate to appoint Tuchel as their U21 boss, but a better offer came along. 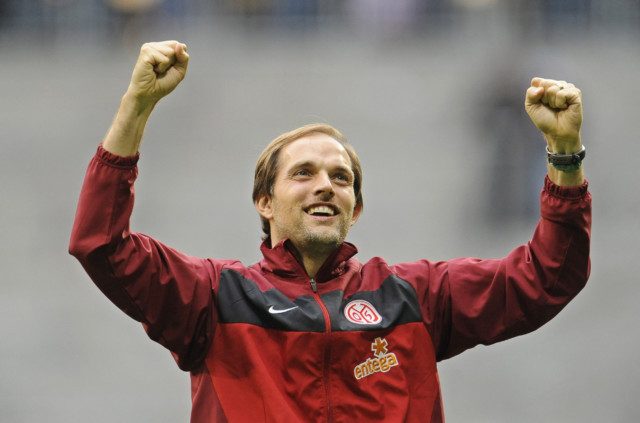 When the opportunity came, Tuchel became head coach of Mainz in 2009 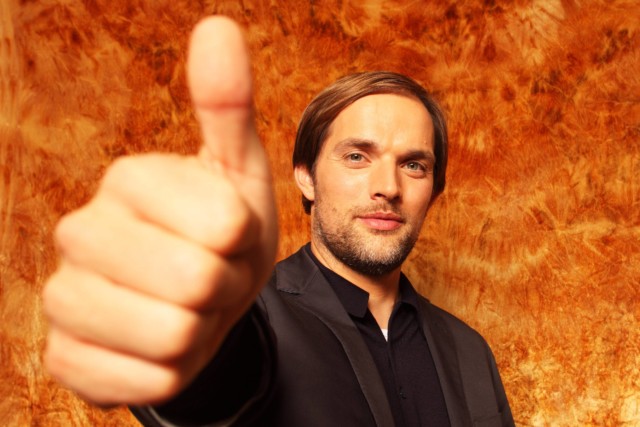 With Mainz playing in their first season in the Bundesliga after promotion the previous year, Tuchel guided the club to a ninth-placed finish.

The following season, after an incredible seven-game winning run, that included a 2-1 away victory at Bayern Munich, they finished fifth to qualify for the Europa League for the first time in their history.

Tuchel was being talked about as a master tactician by the German press, with his attacking style lauded by football experts.

“There’s definitely a style that’s been attributed to me, that we brought to the table at Mainz: pace going forward and attack-minded football,” he told German newspaper die Zeit.

While Tuchel was also willing to think outside the box when it came to rallying his players and preparing them for games.

Once, instead of making his players watch video analysis after a crushing defeat, he motivated them with a powerful speech borrowed from Michael Jordan. 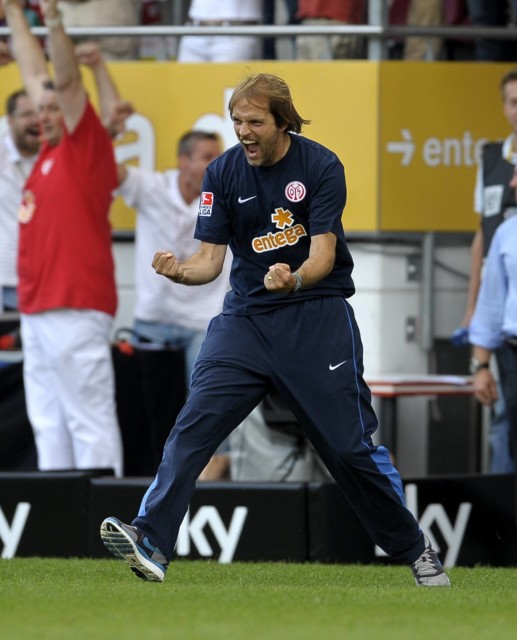 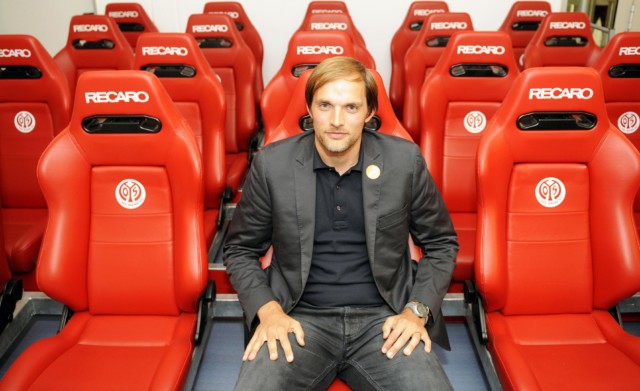 Inspiring team talks, including using quotes from Michael Jordan, were all part of his success

Tuchel also hired Rene Maric, a young football fan who posted his musings on games on a blog, to scout opposition teams and players.

WELCOME TO THE BIG LEAGUE

After a 12-month sabbatical, Tuchel was named Borussia Dortmund coach – following in the footsteps of Jurgen Klopp.

Young stars like Christian Pulisic and Ousmane Dembele were nurtured, thriving under the new boss as the club finished runners-up in the Bundesliga in 2016 in his second season.

However, winning his first trophy as a manager in 2017 was soured just thre days later when he was sacked. A strained relationship with the club’s hierarchy, notably CEO Hans-Joachim Watzke, was deemed to be the reason.

That didn’t deter PSG from making a move for Tuchel, who reportedly turned down Bayern Munich’s advances beforehand, in the summer of 2018 and he won Ligue 1 in his first season.

But again, tensions arose when he clashed with senior figures, including sporting director Leonardo. 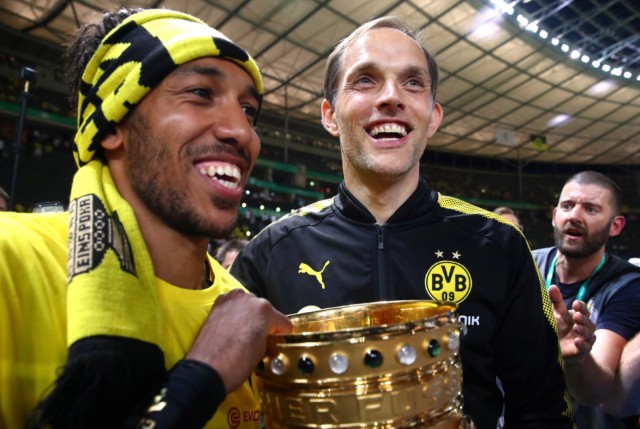 Days after winning the German Cup, Tuchel was fired by Borussia Dortmund 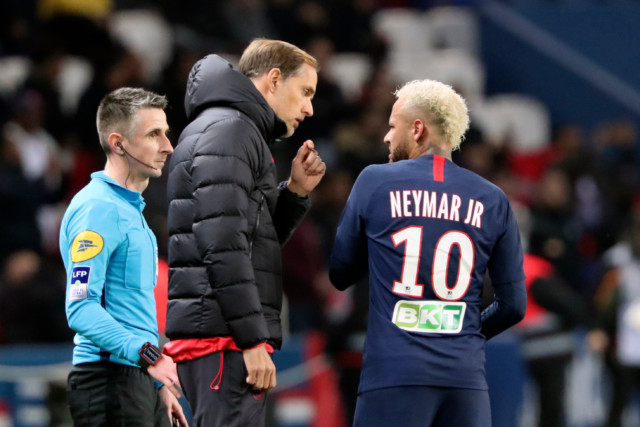 As boss of PSG between 2018-20, Tuchel managed superstars like Neymar 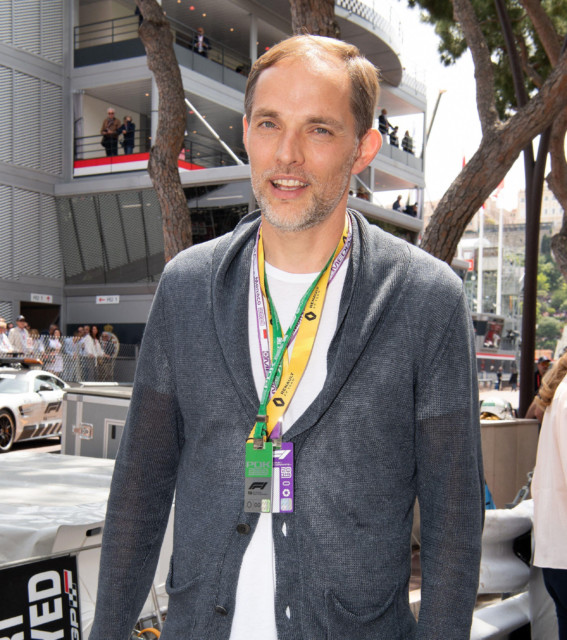 Could Tuchel’s next destination be Stamford Bridge?

Tuchel didn’t help his cause when he said he felt “[more like] a politician in sport” than a coach. Leonardo bit back that Tuchel “[must] respect the people above [him]” and said the comments were damaging for the club.

Despite recording a domestic treble in his final season in Paris, as well as being a Champions League runner-up, he was fired again.

One to speak his mind, it begs the question if Stamford Bridge is the right setting for Thomas Tuchel under the watchful gaze of Chelsea owner Abramovich.