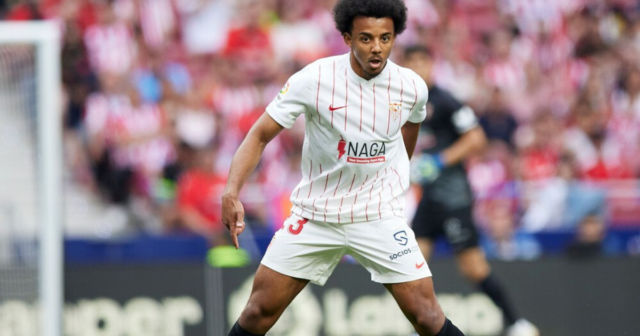 CHELSEA have “put in place” plans to sign Sevilla centre-back Jules Kounde after reaching a verbal agreement, according to reports.

The Blues are set to lose Antonio Rudiger and Andreas Christensen for FREE this summer to Real Madrid and Barcelona.

Kounde is keen on a move to Chelsea this summer

And according to Goal, Chelsea have put plans in place to sign long-term target Kounde from Sevilla as soon as Todd Boehly’s takeover is completed and sanctions end.

The 23-year-old has a verbal agreement in place for a move this summer and wants a move to Stamford Bridge after talks collapsed last summer.

Sevilla are also said to be keen to do a deal as early as possible to allow them to sign a replacement.

The LaLiga outfit want a fee or around £59million for the France international, who can play both centrally and at right-back.

Blues boss Thomas Tuchel had a meal with prospective new owner Boehly last week, but transfers were not a topic of conversation.

But the German believes Boehly’s ambition will continue in the transfer market after his acquisition of Chelsea.

Speaking after Chelsea’s FA Cup final loss to Liverpool on the weekend, Tuchel said: “He paid some money for it, so I don’t think he is keen to drop the ambition.

“We will share our opinion in more detail over the next weeks and I am sure he is as ambitious to build a competitive Chelsea for the highest level.”

There may also be a number of outgoings this summer with contract situations needing to be resolved.

Jorginho, N’Golo Kante, Marcos Alonso and club captain Cesar Azpilicueta are all out of contract in the summer of 2023.

The club could look to move those players on before losing them for free, or try to tie them down to new deals.