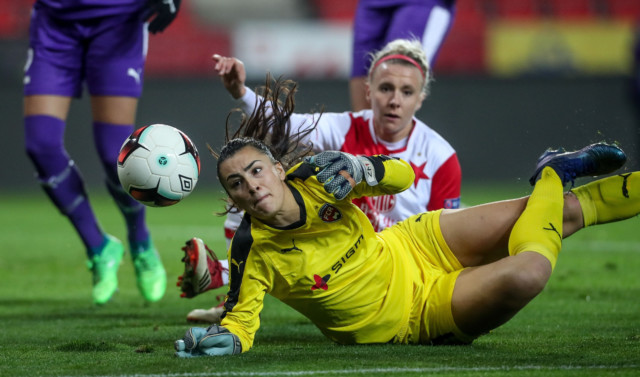 The 24-year old will start at Kingsmeadow from January 1 and will be in contention to face Reading at Madejski Stadium for the Blues’ first game of the year.

The stopper has played for Malmo, which was renamed Rosengard, since 2012, lifting four league titles and three Swedish Cups along the way.

She even starred against Chelsea in the last-16 of the Champions League in three-years ago.

Musovic nabbed her first senior cap in March 2018 against Russia at the Algarve Cup and was called up for last year’s World Cup.

On penning a deal with the Blues, the Swedish keeper said: “It is a huge honour to be representing one of the biggest clubs in the world.

“The women’s game is developing fast, especially in England, and Chelsea is one of the top teams that are driving that process forward.

“I am always striving to be the best and therefore, I am happy to be joining one of the best.

“I cannot wait to continue my journey in London and hopefully help the club to reach even greater heights in the future.”

Boss Emma Hayes, added: “We first saw a young Zecira in our pre-season friendly against Rosengard nearly four years ago.

“We spotted she had potential right from the start and after monitoring her over a number of years, we are confident she fits the profile of a Chelsea goalkeeper well.

“Zecira is driven, hungry to be the best and also has international and Champions League experience.

“I have no doubt her best is yet to come and we really look forward to welcoming her into the team in the New Year.”

Did you miss our previous article…
https://www.sportingexcitement.com/football/premier-league/as-wayne-rooneys-son-kai-joins-man-utd-neville-zidane-gullit-maldini-and-sons-aiming-to-follow-in-dads-footsteps

In this article:chelsea, madejski stadium, Reading