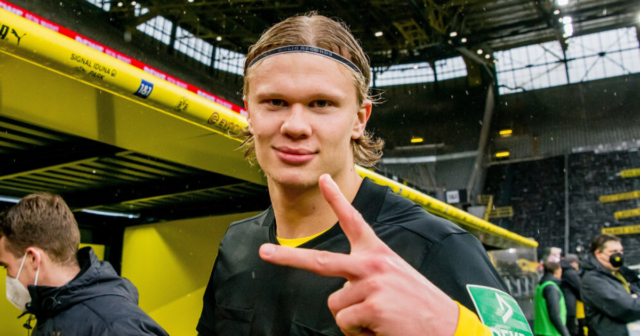 BORUSSIA DORTMUND striker Erling Haaland reportedly refused to commit his future to the club when asked by German media.

The 20-year-old is believed to be a transfer target for European champions Chelsea, with rumours suggesting the Blues will table a huge offer this summer.

Erling Haaland, 20, is believed to be a transfer target for Chelsea

Christian Falk, a journalist for German newspaper Bild, claims the publication asked Haaland if he was staying at Dortmund.

The Norway international reportedly smiled and said nothing, missing an opportunity to quash any lingering rumours.

Recent reports suggest Chelsea will make a £135million bid for Haaland this summer.

But it’s understood Dortmund will only let their prized asset go for £150MILLION – despite an alleged £65m release clause coming into play in 2022.

The German giants have already agreed to sell winger Jadon Sancho to Manchester United for a reported £73m, with the deal expected to be confirmed shortly.

Haaland has been in sensational form for Dortmund since joining the club from RB Salzburg in January 2020, scoring 40 goals in 43 Bundesliga games.

It’s believed Chelsea will try and sign a striker this summer after their incumbent stars struggled to find the net last term.

Midfielder Jorginho finished as the Blues’ top scorer in the Premier League with seven, one more than reported £53m signing Timo Werner.

Fellow striker Tammy Abraham also hit six in the Prem but barely featured under manager Thomas Tuchel after his appointment in January.

The England international is expected to leave Stamford Bridge this summer, with West Ham believed to be leading the race for his signature.